New adjunct professor will work on masters in aviation finance 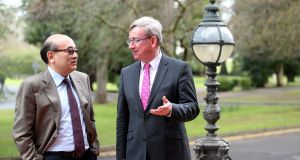 Mr Liu has been appointed adjunct professor at the UCD school, where he will work on its masters in aviation finance programme. GECAS was one of six companies that aided the university in developing the course.

He stepped down as chief executive of GECAS a year ago, handing over to Alec Burger, but remained as chairman for a period after that.

The General Electric subsidiary owns $42 billion worth of aircraft, which it leases to more than 150 airlines.

The company employs about 250 people in the Republic, most of them at its main centre of operations at Shannon.

“The participation by Norm Liu in the MSc Aviation Finance will assist UCD develop the talent the industry will need to sustain and expand long-term growth,” he said.