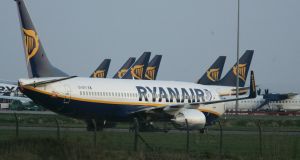 Ryanair is cutting passenger numbers in Republic to 14 million from 14.4 million this year, with reductions in Dublin and Shannon. Photograph: Alan Betson

Ryanair could sign a passenger-sharing deal with either Aer Lingus or Norwegian Air Shuttle by April or May, according to chief executive Michael O’Leary.

The airline has been in talks with both rivals about the possibility of it feeding passengers into their long-haul networks, in what would be the first agreement of its kind by the low-cost carrier.

Mr O’Leary said on Tuesday that he was hopeful that such a deal could be done with either Aer Lingus or Norwegian “by April or May of this year”.

Aer Lingus wants to grow its transatlantic business by taking traffic from Europe through Dublin Airport, while Norwegian is building a low-cost, long-haul network. A passenger-transfer deal with Ryanair would suit both strategies.

Ryanair will add services from Dublin to Tours and Valencia next winter. It will carry 120 million passengers this year, but is cutting numbers in the Republic to 14 million from 14.4 million, with reductions in Dublin and Shannon.

A letter from chief commercial officer, David O’Brien, to Dublin Airport managing director, Vincent Harrison, shows that Ryanair proposed adding two million passengers there this year in return for a 15 per cent discount on charges.

“The difficulty is that the DAA is now seeking to effectively reimpose this tax for its own benefit through increased charges.”

A DAA spokesman said that its charges were not increasing. “Our charges are flat,” he said. “Dublin Airport welcomes Ryanair’s new winter routes to Tours and Valencia.”

He pointed out that its growth discount scheme remained in place. This rebates all airlines based on the number of extra passengers that they have brought to Dublin in a given year.

Ryanair’s chief marketing officer, Kenny Jacobs, warned that airport charges and other costs would have to come down so the Republic could draw tourists from Europe to compensate for a likely fall in British visitors following Brexit.

Britain accounted for 43 per cent of the Republic’s tourists last year, but that could decline as the UK economy slows and sterling weakens, both Mr O’Leary and Mr Jacobs warned.

Meanwhile, Mr O’Leary said he could not see how German carrier Airberlin’s agreement to provide craft and crew to fly routes for rival Lufthansa “could not be anticompetitive”. Ryanair intends to challenge the plan, beginning with a complaint to the German mergers regulator, the Bundeskartellamt.

It emerged yesterday that Etihad chief executive, James Hogan, will shortly step down. His strategy of taking stakes in troubled European carriers such as Airberlin and Alitalia has come under increasing fire recently.