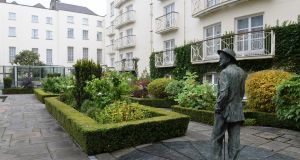 Profits have tumbled almost 40 per cent at Northern Ireland’s largest hotel group, which is co-owner of Dublin’s five-star Merrion Hotel.

Accounts just filed by the Hastings Hotels Group show that profit fell 39 per cent to £3.19 million (€3.5 million) even though turnover at the group was 4 per cent stronger in the 12 months to the end of last October at £41.18 million.

The group currently owns seven luxury hotels across Northern Ireland including the five-star Culloden estate. It is a 50 per cent shareholder of Dublin’s Merrion Hotel from which it shared £1 million in profit last year.

Group’s profits were boosted by a £334,937 gain in the value of an investment property.

Revenues were boosted with the opening of the Grand Central hotel in Belfast last summer, where 104 rooms were added to the hotel. The group also owns the Europa Hotel in the city.

The directors state that the group “will continue to seek every opportunity to increase profitable turnover” in what they characterise as a competitive environment.