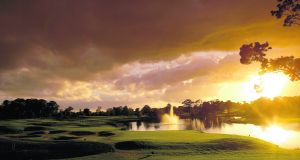 The K Club’s parent company made a loss of €3.1 million for 2017. Photograph: David Cannon/Getty Images)

The five-star K Club golf resort in Kildare owned by Michael Smurfit has slipped deeper into the red, according to accounts filed this week.

Bishopscourt Investments, the K Club’s group parent company, made a loss of €3.1 million for 2017, the financial statements say.

The company managed to narrow its net losses, however, after losing almost €4.9 million the previous year. Its operating loss was also cut from €2.8 million to about €1 million, after the K Club increased revenues by more than €2 million to €18.8 million during a then-record year for Irish tourism.

A note to the accounts states that the K Club, which has been on the market for more than a year, is still for sale with Savills estate agents.

“As of [June 20th, 2019], no agreement is in place with any prospective purchaser for the acquisition of the business,” the note says.

About €900,000 of a shareholder loan to Mr Smurfit was repaid during the year, the figures suggest, leaving an outstanding balance owed to the retired businessman of €56.1 million.

The K Club has a €13 million hole in its balance sheet at the end of 2017, with the shareholders deficit up from €9.8 million a year previously.