Campaigners acknowledge statements made ‘without providing a sufficient factual basis’ 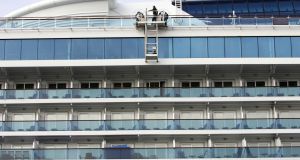 A businessman and a public relations firm campaigning to stop Dublin Port reducing cruise ship arrivals have apologised to the port’s chief executive, Eamonn O’Reilly, over press releases he claimed were defamatory.

Lorcan O’Connor, a director of Carroll’s Irish Gifts, and PR firm Paul Allen & Associates apologised to Mr O’Reilly and Dublin Port Company for three press releases issued in May and June as part of their campaign.

Mr O’Connor is a founder member of the All Ireland Cruise Ship Action Group, a lobby group seeking to reverse the port’s decision to reduce the number of tourist cruise ship arriving at the port in the coming years.

The businessman, supported by Mr Allen’s PR firm, led a high-profile campaign over recent months that included press releases, social media posts and an appearance before an Oireachtas committee.

Mr O’Connor and the PR firm acknowledged through their solicitors that the press releases “unfortunately” contained “some limited references” to Mr O’Reilly and the port company and “robust expressions of opinion which were unwarranted and/or were stated without providing a sufficient factual basis”.

In a letter from their solicitors – seen by the Irish Times – they agreed to retract the statements and undertake not to repeat them, and confirmed that they would preserve all correspondence with third parties in which they published the statements. They also agreed to provide a list of media outlets they sent the press releases to.

Mr O’Reilly and the port company made a complaint against Mr O’Connor about unspecified tweets but his lawyers were unable to provide, as requested, the number of people who may have read them.

Solicitors for Mr O’Connor and Mr Allen’s firm told Mr O’Reilly and the port company in the letter sent on Wednesday that the “adverse impact” on Dublin-based and nationwide businesses which rely on tourist numbers “has been at the heart” of their campaign to prevent a reduction in cruise ship arrivals at the port.

“The sole motivation of Mr O’Connor and the said voluntary group has at all times been to protect businesses and jobs reliant upon tourist numbers,” their solicitors said in a letter to the port company’s lawyers.

Two of the press releases issued in June related to statements made in response to news reports about company credit-card expenditure of more than €500,000 last year by Dublin Port Company and the port’s executives and managers on flights, restaurants and entertainment.

The board of the port company has said the expenditure was incurred on company business and involved “no malpractice”. Nonetheless, it has called in accountants Mazars to carry out an external review to confirm and verify that all spending was “both appropriate and properly authorised”.