Economic boost for Lahinch as Irish Open set to tee off 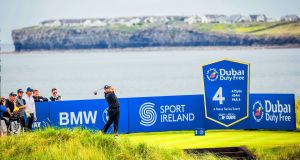 The staging of the Dubai Duty Free Irish Open at Lahinch is having “a transformative effect” on the seaside resort, according to local hotelier, Michael Vaughan.

Mr Vaughan said that about €10 million has been invested by the public and private sector in the resort in the past year .

About 100,000 golf fans are expected to converge on the resort over the weekend for the Open which takes place at the “old course” at Lahinch golf club.

In preparation, businesses have been busy giving the village a make-over with Mr Vaughan quipping “premises that never got a lick of paint in my lifetime have got a fresh paint in the last few weeks”.

Clare County Council has also been busy, carrying out upgrade works on the promenade and around the resort over the past number of months.

“The investment is phenomenal. It is unprecedented for Lahinch. It will be a watershed week for the resort, ” Mr Vaughan said.

The staging of the competition at Lahinch is the first time it has taken place in the golf club’s 127-year history and is the largest sporting event to ever take place in Co Clare.

Mr Vaughan estimated that the spend by visitors in Lahinch for the remainder of the week will be €6-€7million.

Antoin O’Looney, owner of O’Looney’s bar on the promenade, said on Tuesday that the excitement over the Open “has gone orbital” in the area. His premises bore the brunt of “house size” waves during the January 2014 storms and featured in photos of the waves crashing over his bar. “This week is going to be very special for Lahinch, ” he siad.

He said that pub and restaurant owners have met and there was a consensus that there would no one “jacking up” prices for the week of the Open.

“We don’t want visitors here leaving with a bad taste, feeling that they have been fleeced. That would be very short-sighted,” he said.

Mr Vaughan said that hotels in the village have also agreed with the organisers that rates for the week wouldn’t be any higher than 20 per cent more than usual summer rates.

Mr Vaughan said that he has been booked out since last summer for the event.

Chairman of the Lahinch Golf Club tournament committee, John Gleeson said that the Open “is within a whisker of being sold out for the weekend days and sales for Thursday and Friday are very strong as well”.

The Pro-Am will take place on Wednesday with singer Niall Horan, actor Jimmy Nesbitt and Conor “Sketches” Moore playing in the same four-ball.

The last four-ball out for the day includes businessmen JP McManus and Dermot Desmond who will be playing with jockey legend, AP McCoy and Swedish golfer, Robert Karlsson.

Mr Gleeson said: “Wednesday will be a lot of fun, but the real action starts on Thursday at 6.45am.”

The course has been shut for the past two weeks to allow preparations continue and Mr Gleeson said: “The course is in amazing condition.”

Mr O’Looney said: “With the forecast good for the week, we couldn’t be better placed for what will be a historic week for Lahinch.”