Irish airline says revenue rose 11% to €2.3bn, aided by it cutting average fares 6% to €36 over the first quarter of its financial year 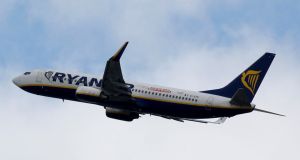 Ryanair said profit after tax was €243m for the three months to June 30th. That was down 21% from €309m a year earlier, but ahead of analysts’ predictions which had forecast a profit of €232m. Photograph: Regis Duvignau/File Photo/Reuters

Ryanair Holdings’ predicted that air fares would continue falling this summer after reporting that profit fell 21 per cent to €243 million in the three months ended June 30th.

The Irish airline said revenue rose 11 per cent to €2.3 billion, aided by it cutting average fares 6 per cent to €36 over the three-month period, the first quarter of its financial year.

The lower fares boosted the number of passengers that Ryanair carried in the three-month period to 42 million from 37.6 million during the same months in 2018.

Ryanair said profit after tax was €243 million for the three months to June 30th. That was down 21 per cent from €309 million a year earlier, but ahead of analysts’ predictions published before the results, which had forecast a profit of €232 million.

Shares in the group, which owns Ryanair, Buzz in Poland, Lauda in Austria and Malta Air, fell 1.36 per cent on Monday to €9.884.

He said seat prices continued to decline in this quarter, and the airline expected fares for the six months to September 30th to be down 6 per cent on the same period last year.

Ryanair’s board has nominated Louis Phelan to take over as senior independent director in summer 2020, when Kyran McLaughlin, current holder of the role, retires.

Ryanair’s revenue per passenger was flat at €55. While fares fell 6 per cent, ancillary revenue, that is food and drink sales, baggage and other charges, increased 14 per cent.

Net debt was flat at €419 million. Mr O’Leary noted that this was despite a change in accounting rules governing aircraft leases that increased overall liabilities by €220 million, and the fact that the group returned €100 million to shareholders in its first quarter.

Mr O’Leary said Ryanair continued to expect profit for its current financial year, which ends on March 31st, to be between €750 million and €950 million.

“We expect traffic to grow by 7 per cent to over 152 million, slightly less than the 153 million previously guided due to the Boeing Max 737 delays,” he said.

Earlier this month Ryanair cut forecasts for growth in passengers next summer to 3 per cent, and confirmed it was looking at base cuts and closures from November amid delays in the delivery of 50 new Boeing 737 Max aircraft.

Two fatal crashes blamed on software faults saw regulators ground the 737 Max aircraft earlier this year. Ryanair said it expects the 737 Max to return to service before the end of the year, but the Max200 variant it has ordered needs to be separately certified by authorities in Europe and the US. That is expected to be within two months of the Max returning to flying service.

1 Son putting elderly dad under pressure to sign over land
2 BOI customers to be charged twice with bank fees on New Year’s Eve
3 How to gift your child a house deposit . . . tax free
4 Family in court dispute over hotels in Dublin and Galway
5 Ryanair warns it may reduce more Irish services and relocate operations
6 Stripe in talks for new funding at much higher valuation
7 Workers have little idea of the cost of retirement income
8 City of London makes late scramble to limit Brexit disruption
9 Irish designer of Oxford vaccine: ‘I’ve never worked so hard in my life’
10 Irish start-up which developed facial recognition for cows raising over $50m
Real news has value SUBSCRIBE