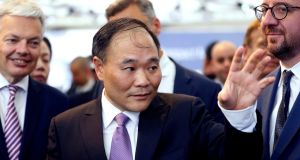 Geely chief executive Li Shufu: seeking to build the firm into a Chinese version of the Volkswagen group with brands in different market segments.

Geely has acquired close to 10 per cent of Mercedes-Benz owner Daimler for about $9 billion (€7.32 billion), becoming its largest shareholder in the latest sign of the global ambitions of the Chinese group.

Geely, which already owns Volvo Cars and Lotus, has built up a 9.69 per cent stake in Daimler, the German carmaker said in a filing late on Friday. The stake is worth roughly $9 billion.

Li Shufu, the chairman of Zhejiang Geely Holding Group, will travel to Germany this week following the disclosure to begin talks with Daimler, according to one person familiar with the details. He is seeking to build the company into a Chinese version of the Volkswagen group with brands in different segments of the market.

The move marks a further push into Europe for the Chinese carmaker, a market Geely hopes to break into in its own right with its all-electric Lynk & Co brand next year.

Geely, which is racing to build electric cars to meet tough Chinese emissions rules that come into force next year, is keen to strike a deal with Daimler over sharing battery technology, according to two people familiar with the company’s thinking.

Daimler is considered among the furthest ahead in the automotive industry in developing pure electric technology, with ambitious plans to release 10 different fully electric vehicles by 2022 and to invest more than €10 billion into the technology.

Daimler currently has a joint venture with BYD in China to build electric cars.

Geely’s expansion comes only weeks after a $3.9 billion move to become the biggest shareholder in truckmaker Volvo AB.

Daimler said: “We welcome that the entrepreneur Li Shufu will become a long-term oriented shareholder.”

Geely, which declined to comment, approached Daimler in October to issue fresh equity in order to enter as a shareholder, according to two people familiar with the discussions, but was rebuffed.

International motor manufacturers are seeking to strike deals in China, the world’s largest car market, but centred on electric cars to get an increased foothold in a segment set to grow rapidly.

China has ambitious targets for electric vehicles to tackle air-quality issues in many of its major cities.

BMW on Friday said it was in advanced talks with Great Wall to build an all-electric Mini model in the country, while Ford is planning to launch a series of electric vehicles in the market under a new brand in partnership with local carmaker Zotye.

Meanwhile, Geely has built up a portfolio of international brands as it seeks to create a company that will mimic the sprawling Volkswagen empire.

The Chinese group bought Volvo Cars from Ford in 2010, and has since transformed the fortunes of the Swedish carmaker.

Late last year, Geely acquired a stake in the Volvo Trucks group, a separate entity, becoming its largest investor in a deal that has not yet closed.

The group also took a 49 per cent stake in troubled Malaysian carmaker Proton in 2017, as well as a controlling interest in the British sports car brand Lotus.

Bank of America advised Geely on the stake acquisition, according to people close to the situation. These people said the deal was structured via a funded equity collar. Goldman Sachs is working with Daimler. – Copyright The Financial Times Limited 2018