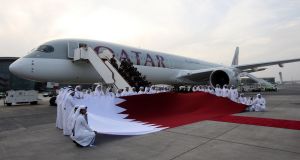 Qatar Airways staff hold a national flag in front of an Airbus A350-1000 at Hamad International Airport in Doha, Qatar. Photograph: Reuters

“The Qatar Airways A350-1000 will keep Qatar ahead of the curve and allows us to continue to offer our passengers the outstanding levels of comfort and style that they expect from Qatar Airways.”

The first route will be Doha to London. Qatar operates from Dublin to Doha four times a week.

Business travellers often complain about the ardour of being on the road, but it seems the reality is not so bad. In the inaugural National Car Rental State of Business Travel Survey, found that while 80 per cent of travellers of US business travellers use trips as an opportunity to play tourist, it seems they are reluctant to tell others abut non-work activities, 38 per cent said they would rather not share their experiences.

The survey found that while 80 per cent of US business travellers take time for fun or personal activities when they travel for work, 38 per cent said they would not share those experiences with their supervisors. However 92 per cent of the bosses and supervisors surveyed said they approve of their workers mixing leisure and work on business trips.

“We were pleasantly surprised to see our survey results showed not only are frequent business travellers finding ways to balance both business expectations and personal interests on the road, but that their bosses support them in doing so,” said Rob Connors, vice president of brand marketing for National Car Rental.

The TIFCO hotel group paid €45.7 million for the purchase of the 12-hotel Travelodge business in Ireland, the That is according to accounts for TIFCO’s holding company Halstonville Ltd, which also confirm the group also paid €13.3 million for the Parliament hotel and the adjacent Fashion House building in Temple Bar in Dublin in July 2016.

The group has since secured planning permission for a 77-bedroom extension to the hotel. The €45.7 million paid for the Travelodge business on December 1st, 2016 doubled the money Richard O’Sullivan and Séamus McGowan paid for Travelodge’s Irish business in 2004 in a €22.5 million deal.

Marriot, Hilton and Hyatt hotels have all changed their policies on cancelling a booking. Most hotels would allow guests to cancel up to midday on the arrival date or the previous date. Now some of the biggest hotels groups are introducing a48-hour rule for cancelling with some charging for the first night or the whole booking. Make sure your plans are firm before making a booking