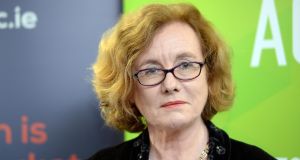 Isolde Goggin of the Competition and Consumer Protection Commission: was not notified by car dealers. Photograph: Eric Luke

Regulators are investigating a possible breach of merger law involving the takeover of one motor dealer by another in 2015.

The commission said on Friday that it has begun investigating a suspected breach of the requirement to notify it of the deal, which it pointed out was a criminal offence under Irish competition law.

“The CCPC’s investigation is ongoing and, as such, the CCPC is not in a position to provide further information at this time,” the organisation said in a statement.

Fines for failing to notify the commission of a merger can be up to €3,000 for anybody convicted of a minor breach or up to €250,000 where the offence is serious.

The CCPC said that it became aware last August that Armalou may have bought its rival without notifying the acquisition to the commission.

The commission, headed by Isolde Goggin, regulates competition and mergers in the Republic. It can prosecute minor offences in the District Court or refer serious breaches to the Director of Public of Prosecutions, who can try them before a jury in the Circuit Court.

The regulator now plans to carry out its normal investigation of the Spirit Ford-Lillis-O’Donnell merger to ensure that it does not affect competition.

Because the companies failed to notify the CCPC, the merger is legally void, at least until the commission approves it.

“On February 9th, 2018, the CCPC received a notification of the acquisition by Armalou Holdings Ltd, through its wholly owned subsidiary, Spirit Ford Ltd, of Lillis-O’Donnell Motor Company Ltd,” the commission added.

Armalou Holdings owns the Spirit chain of motor dealers in Dublin and OHM group, which imports and distributes Jaguar and Land Rover cars in the Republic .

Lillis O’Donnell is a large Ford dealer based at a landmark site close to the M50 motorway and Red Cow interchange in Clondalkin in south Dublin. Armalou did not comment on Friday.

Since 2014, takeovers or mergers involving businesses with a turnover of €3 million or more a year must be notified to the CCPC for approval before they can go ahead.

The commission investigates each deal to ensure that it does not limit competition before it approves them. It can refuse to allow mergers to go ahead where they damage competition, or impose conditions on one or both parties before giving them the green light.