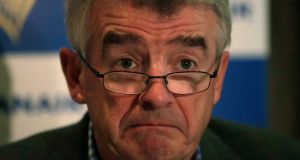 Ryanair expects staff to strike during Easter week in either Ireland or Portugal, chief executive Michael O’Leary said on Wednesday, as talks with some of the airline’s unions over formal recognition and improved conditions faltered.

O’Leary earlier this month warned of possible disruption at Easter or the summer, but did not specify which markets were likely to be hit.

At the time he said that the airline would rather see bookings damaged by the uncertainty around a strike than give in to “laughable” union demands.

Ryanair averted widespread strikes ahead of Christmas by announcing plans to recognise pilots’ unions for the first time in its 32-year history.

But talks with pilot unions to formalise union recognition and improved terms have stalled in recent weeks. While Ryanair says talks are ongoing in seven countries, only British union Balpa has signed a recognition agreement.

“We expect some adverse publicity . . . and some disruptions,” O’Leary told a news conference in Lisbon on Wednesday. “We had a strike in Germany on December 22nd . . . we expect the next one will be in Ireland – or maybe it will be in Portugal – during Easter week.”

No flights were cancelled during the four-hour December 22nd strike.

Irish pilot union Ialpa has not announced plans to strike, but it has said pilots had rejected an offered raise and that Ryanair was refusing the union’s demand to be recognised as the exclusive body for collective bargaining.

Portuguese cabin-crew union SNPVAC has said it will decide this week when to strike, with a maximum action of three days in late March and three days in early April, union official Fernando Gandra told Reuters on Wednesday.

The strike was motivated by “worsening labour conditions, a lack of respect for the dignity of the cabin crew . . . and threats over sales objectives”, he said. Ryanair says it offers staff some of the best conditions in the low-cost sector.

O’Leary said he was making “significant progress” in talks with Portuguese pilots’ union Spac, but that management would only open talks with cabin crew after agreement had been reached with pilots.

He said management had offered a pay increase directly to Portuguese pilots, bypassing the union, and that 75 per cent of pilots had accepted the offer.

Ryanair last year flew 130 million passengers from 87 bases across Europe, including four bases in Portugal and four in Ireland. It says it operates about 20 per cent of Portugal’s 28 million annual flights and 48 per cent of Ireland’s 18 million. – Reuters