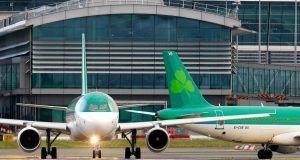 The Irish Airline Pilots’ Association confirmed on Friday that a majority of Aer Lingus members had backed the pay deal. Photograph: Reuters

Aer Lingus pilots voted for pay increases of almost 11 per cent over close to three years in a ballot completed on Friday.

A tribunal chaired by senior counsel Gerry Durcan recommended a pay increases and more flexible work practices for Aer Lingus pilots following a year of talks involving their union and the company.

The Irish Airline Pilots’ Association (Ialpa) confirmed on Friday that a majority of members voted in favour of the deal, which provides for 10.9 per cent pay increases over 33 months, dating back to last year.

Neither side’s statement detailed the agreement, but it is understood the deal provides for an increase of 4 per cent due now, 3 per cent backdated to April 2017 and 1 per cent from January 2019.

Another 2.9 per cent is in return for increased flexibility and productivity, which includes flying the Airbus A321neo long-range craft that the airline is buying.

Aer Lingus will get eight of the A321s over 2019 and 2020. The craft will allow the airline fly to more destinations on the east coast of the United States, facilitating plans to grow its transatlantic business further.

“This agreement between Aer Lingus and their pilot body will only strengthen their position in the aviation world, especially as they look to expand their horizons over the next few years,” he added.

Aer Lingus welcomed news that the pilots had voted to accept the pay tribunal’s findings.

“This agreement will support our growth strategy, the introduction of new routes, the addition of new aircraft to our fleet and the continued expansion of our north Atlantic gateway at Dublin,” the airline said.

Siptu and the Technical, Electrical and Engineering Union, which represent ground and cabin crew, are working on similar deals with the company.

They have already agreed the pay element of their respective arrangements and are in talks on measures to boost flexibility and productivity.

The Labour Court recommended similar pay increases to these groups last year which staff subsequently accepted in a number of ballots.