Electric cars to the fore, but robot driving takes a back seat 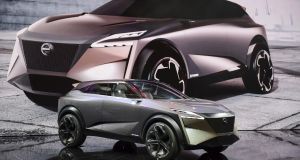 Nissan’s IMQ concept crossover: Is this the face of the next generation Qashqai?

Geneva’s Palexpo hall, the home of its famed motor show, was practically bursting with electricity on Tuesday, and not all (or even much) of that came from the excitement of seeing all the new metal on display.

No, the sparks were (thankfully not literally) flying because pretty much every car maker had brought along a slew of new electric models to show off. Indeed, brands such as Peugeot, Audi, and Kia boasted that their motor show stands were 100 per cent electrified, with only electric or plugin hybrid models on show. While a half-decent lawyer might be able to unpick one or two of those claims, the sentiment was clear — motoring is going all-electric.

But not straight away. Whether it was Audi’s Q4 e-Tron concept, Kia’s ‘Imagine By Kia’ SUV-Coupe, Mercedes’ battery-powered V-Class van, or Fiat’s cute-and-utilitarian Centoventi electric Panda concept, almost all the launch dates are in the future. Late 2019 at best, with most saying that their all-electric models won’t be available until some time in 2020.

A result of the long research and development lead times needed to create these new armies of electric cars? Not so, say some critics. Indeed, environmental lobbying group Transport & Environment told The Irish Times that it’s preparing to publish a report this week that claims the car companies are artificially holding back on battery sales so as to take fullest advantage of so-called ‘super credits’ which allow them to claw back fines for making higher emissions models.

The other black cloud hanging in the air is, of course, Brexit. While there was no mention of the dreaded ‘B’ word in the official speeches made by the industry leaders, concerns over the UK’s disorderly exit from the EU hung in the carpeted and wood-lined spaces behind the show stands, with some car company staff apparently even running a book on how many times today they’d be asked about their Brexit-proofing plans.

The most obvious manifestation of Brexit, though, was the absence of car makers most likely to be affected by it. Jaguar Land Rover, currently facing the twin headwinds of Brexit and a collapse in the Chinese market sales, was a no-show and its usual allocated stand space given over to a coffee shop. The company’s absence brought a bitter-sweet tang to its victory in the European Car Of The Year contests, announced the evening before the show. The all-electric Jaguar I-Pace took a hugely deserved win, even if it had to go to a second count to fight off the much-admired Alpine A110 sports car.

Actually, the Car Of The Year contest — which turned into a battle royale between electric power and traditional sporting prowess — is as good a metaphor for the 2019 Geneva show as you may find. New cars appearing at the show were almost perfectly divided between forward-looking electric propulsion and last-blast high-performance petrol power. Ferrari (T8 Tributo), Lamborghini (631hp Huracan Evo Spyder, Aventador SVJ Spyder), and Bugatti (one-off €11-million version of the Chiron) brought the supercar firepower, as did Aston Martin with its new Vanquish mid-engined concept, and a new 003 supercar spun off from its Red Bull F1-designed Valkyrie.

Meanwhile, Kia has decided that high-performance and premium looks aren’t mutually exclusive from electric power — its Imagine By concept might be a bit of pie-in-the-sky show car fairy dust, but it does preview a new family of higher-end, higher performance, all-electric Kias (just not with 21 separate touchscreens in the cabin…).

While Audi showed off nothing but electric cars (the Q4, a sportier version of the e-Tron quattro, and plugin hybrid versions of the A6, A7, A8 and Q5) Mercedes’ stand was a little more reluctant to push the full-electric button. Oh sure, there was a battery powered V-Class concept, the EQV, but there were also last-hurrah versions of both the SL sports car, and the S65 AMG super-limo. That last one being apparently the last time we’ll see a big V12 engine in a Benz. The more conventional AMG GT-R roadster and the rather pretty new CLA Shooting Brake compact estate seemed almost a little lost between those two poles.

Nissan’s IMq concept, aside from being the next Qashqai’s great-grandfather, previewed a new wheeze on the hybrid idea — a system that uses electric motors and batteries to drive the wheels, and is recharged on the go by using a turbo 1.5-litre engine, but doesn’t plug in at all. You want to charge the batteries? Just add petrol… Opel had an award-winning idea along the same lines several years ago with the Ampera, but it ran out of road in European markets.

Peugeot’s new 208 looked uncommonly handsome (very Audi-esque in its styling) and the promise of 300km range from its all-electric e208 version seems impressive, but it wasn’t enough to out-shine Honda’s super-cute E-Prototype electric car, with its teddy-bear face and fake wood interior. Shame that Honda is only talking about a 200km range, though.

Packed with far more range were the VW Group’s other (non-Audi) electric concepts. Skoda’s Vision IV looks like a super-sized Superb hatch, and could lead to a (truly vulgar) BMW X6-style production model. Seat’s El-Born — a mix of Chevrolet Bolt and Tesla Model 3 in its styling — was far more practical, and is apparently mostly production ready, with a 420km charged range. Coolest by far, though, was Volkswagen’s ID Buggy concept — an all-electric re-imagining of the classic sixties Meyers Manx Beach Buggy with Kermit The Frog styling and colour, and a waterproof interior. Better yet, some kind of a production version is promised, and better yet again, if you look closely at the round-eyed styling, you might see a hint of the much-promised all-electric new Beetle.

Was the ID Buggy the most desirable car of the show so far? Arguably so, but true petrol heads may be swayed by the Alfa Romeo Tonale — a secret-till-show-day small SUV that packs a 240hp plugin hybrid powertrain, and promises to do what the Germans still haven’t been able to: make a small crossover look sexy.

Alfa’s owners at Fiat, meanwhile, invoked the spirit of the original Panda for its Centoventi concept — an all-electric city car with a modular interior (you can take out the front passenger seat and replace it with a cargo box or a built-in child safety seat) and a battery pack that can be expanded, to add extra range, even after the car has been bought. Fiat invoked the printer-and-ink financial model of selling an affordable car and then keeping money rolling in by allowing owners to constantly buy, and resell, options and extra batteries, but while much talk was made of millennial obsessions with new ownership models, hopefully the production model that springs from the Centoventi will be rather more sensible.

By contrast, Renault’s new Clio was a welcome dollop of normality, boasting a very clean, high-tech looking new cabin, and apeing the handsome Megane on the outside. It will come with hybrid power, but it’s a rather more realistic prospect for many of us than most of the electric cars on display.

Speaking of sensible, there seems to be a reduced emphasis on autonomous or robotic driving at this year’s show. Aside from the wacky Rinspeed Snap concept, with its autonomous bottom half and swappable ‘pod’ top halves, most car makers seem to be backing away somewhat from robotic driving. The most that most would talk about was ‘Level 3’ autonomy which is about where we are now. Carlos Tavares, the head of PSA Groupe and its multitude of car-making brands — Peugeot, Citroen, DS, Opel, and Vauxhall — said that fully autonomous cars may never make a mass-market breakthrough, because the technology will be too expensive for retail buyers. Tavares made his comments during a press conference where PSA revealed record car-making financial results, which included the first profit for more than two decades for Opel and Vauxhall.

Fully autonomous tech, which would allow cars to entirely drive themselves, will remain the preserve of “those who could anyway afford to employ a driver” said Tavares. He said that PSA would continue to work on advanced driver aids, up to Level 3 (where the car can steer and brake itself on some roads but requires the driver to still pay attention and take control of the vehicle at regular intervals).

Which brings us rather neatly around to one of the most charming new car launches at Geneva — the Morgan Plus Six. A replacement for the old V8-engined Plus Eight, the Plus Six switches to 335hp turbo straight-six engine currently used by both BMW and Toyota. So, with its part-wooden chassis, and veneered interior, you really can think of this 1,075kg flyweight as a genuine mock-tudor Supra. As an antidote to all the unfulfilled electric promises being made, it’s kind of hard to beat.

Expert tips: A podiatrist on footcare
2

Conor Pope: My first Parkrun and it was mortifying
3

Recycling, reusing and reimagining rubbish into clothing and accessories
10