More than 15.5 million people travel through Ireland’s biggest airport in first half of 2019 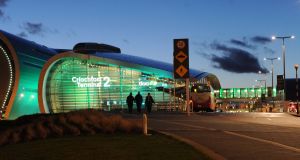 More than 3.2 million people travelled through Dublin Airport in June, setting a new record for the month, the latest figures show.

The airport added that it was the busiest June in its 79-year history.

More than 15.5 million passengers used Dublin Airport in the first six months of this year, 875,000 or 6 per cent more than during the first half of 2018.

Almost 846,000 of them were using the airport to connect between transatlantic flights and services to and from Europe, an increase of 12 per cent on the same period last year.

In June alone, the number of passengers flying between Dublin and continental Europe rose 5 per cent to more than 1.7 million.

Transatlantic traffic also increased 5 per cent with 469,000 people travelling to and from North America.

Passengers flying between Dublin and destinations in the Middle East, Africa and Asia Pacific rose 4 per cent to 95,000 in the month.

Traffic between other airports in the Republic tumbled 19 per cent in June to 9,500.

1 My aunt never told us that Gran passed away with no will
2 Green Party TD queries ‘usefulness’ of another appeal in €13bn Apple tax case
3 Government to push through €2bn credit guarantee scheme next week
4 If it’s safe to do so, could this be the time to spend for Ireland?
5 Covid anxiety among domestic holidaymakers could sink this summer
6 The $6bn judgment pitting Nigeria against Irish businessmen
7 Majority of employees don’t want to return to pre-Covid working patterns
8 Brussels plans attack on low-tax member states
9 Datalex shares slide almost 24% as trading suspension is lifted
10 McKinsey warned Wirecard a year ago to take ‘immediate action’ on controls
Real news has value SUBSCRIBE