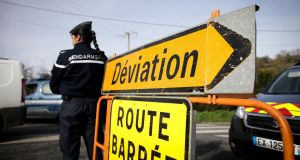 Police close a road near Branville, Normandy, last Friday, ahead of the arrival of 34 French citizens by bus following their evacuation from the Chinese city of Wuhan, which is at the centre of the coronavirus outbreak. Photograph: Lou Benoist/AFP via Getty Images

Irish people are stalling on holiday bookings as coronavirus spreads to several European countries, but travel agents say they have yet to see an outbreak of panic.

News on Tuesday that a case of the virus – now called Covid-19 – surfaced in popular sun spot Tenerife, in the Canary Islands, sparked increased concern amongst Irish people planning to travel in the coming weeks.

Dominic Burke, chief executive of Travel Centres, the Republic’s biggest consortium of travel agents, said on Tuesday that holidaymakers are asking if they should hold off on making plans or should cancel if they have already booked.

“What travel agents are saying is that if your travel date is some way in the future, don’t do anything rash as you run the risk of losing your money if you have paid a deposit,” he said.

Mr Burke added that it was not possible to say if consumers’ caution about the outbreak had translated into a slowdown in business during a period when people traditionally booked their summer holidays.

He explained that other uncertainties, such as the potential impact of Brexit, were feeding into a more general sluggishness, while consumers were moving away from the old pattern of booking summer breaks early in the year.

Barbara Stack of Sunway Holidays said that the company’s business remained largely unaffected, as it had little exposure to Italy, where 10 people have died, or to Tenerife at this time of year.

He pointed out that people must have travel advisory cover on their policies if they want to claim when authorities warn against particular destinations because of disease outbreaks or other risks.

“The Department of Foreign Affairs has to say “do not travel to that region” within 14 days of your departures; then you are entitled to claim,” he explained.

Mr Mulligan suggested that travellers planning to go to affected regions in coming weeks could check to see if it was possible to change their flight and other bookings.

He also argued that there was some “hysteria” over coronavirus, as the figures showed that the death rate from the disease was about 3 per cent, while the normal fatality rate from influenza in the US was 5 per cent to 6 per cent.

The Irish Travel Agents Association (ITAA)warned that holidaymakers should follow Department of Foreign Affairs advice and to be pragmatic about vacation bookings.

Pat Dawson, the organisation’s chief executive, pointed out that the department had not advised Irish people against travelling to any part of Spain, although it has counselled against journeys to affected parts of Italy.

He acknowledged that the industry faced an uncertain period while efforts to track and contain the coronavirus continued.

“The situation is volatile, but we see no reason to panic,” Mr Dawson said.

1 I want to change my will quickly in case I fall ill. Do I need a lawyer?
2 Coronavirus: Property rental in the jaws of the epidemic
3 BidX1 offers 100 properties for sale in latest auction
4 Firms in row with Irish Distillers must provide €1m in security
5 Facing economic meltdown ... and nothing wrong with our economy
6 EU finance ministers hold marathon talks to overcome eurobonds split
7 German fund closes €93m Harold’s Cross build-to-rent deal
8 Aviation lessors experience extreme turbulence
9 Collison brothers worth an estimated €2.9bn each
10 Ten of the most mysterious aircraft disappearances
Real news has value SUBSCRIBE