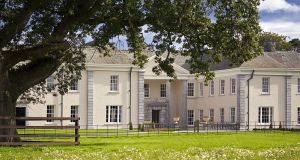 The directors of the five-star Castlemartyr hotel in Co Cork expect that the property will become profitable in the coming years after sustaining losses of €178,283 last year.

New accounts filed by Castlemartyr Top Hotel (Holdings) Ltd show the resort had revenues of €12.03 million in the year to the end of March 2019, up 9 per cent on the previous 12 months.

In a note to the latest accounts, the company’s directors said last year’s results were “in line with expectations due to the nature of investing in a business of this scale”.

The directors said they planned a number of changes in marketing and advertising, as well as refurbishment and development work in the hotel.

The resort, which opened in 2008, was developed by the Supple family. Guests have included former US president Bill Clinton, Bruce Springsteen and celebrity couple Kanye West and Kim Kardashian, who stayed there on the Irish leg of their honeymoon.

Numbers employed at the hotel decreased from 296 to 238 last year as staff costs increased from €4.6 million to €4.84 million.

1 Huawei asks Samsung and SK Hynix for chip supplies in face of US isolation
2 Denis O’Brien forced to lift hood on Digicel in debt restructuring
3 Pricewatch: Coronavirus has given us four categories of shopper
4 Reopening economy does not cause coronavirus spike – researchers
5 Will remote working mean an end for the corporate HQ?
6 The Goldilocks problem of Irish housing: it’s never just right
7 Young Scientist winner Shane Curran (20) raises $16m for start up firm
8 Digicel had $4.2bn deficit before debt plan, new documents reveal
9 Lucy Kellaway: We will miss the office if it dies
10 Will remote working mean lower wages?
Real news has value SUBSCRIBE