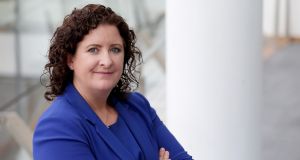 Catherine Toolan, who takes over as managing director of Guinness Storehouse

The State’s most visited tourist attraction, the Guinness Storehouse in Dublin, has appointed a new managing director to replace Paul Carty, who has stepped down after running the venue since its opening almost 20 years ago.

Catherine Toolan has been appointed to take over the running the Guinness Storehouse, which attracted 1.8 million visitors last year, well ahead of other top attractions such as the Cliffs of Moher, Dublin Zoo and the Book of Kells.

Ms Toolan, who takes over in April, joins the venue after most recently running the International Convention Centre in Belfast. She also worked previously for Aramark, and was involved in delivering the athletes villages at the Olympic Games in Beijing in 2008 and London in 2012.

Mr Carty leaves after overseeing growth in the Storehouse’s annual visitor numbers from about 300,000 when it opened in December 2000. He has also overseen Guinness owner Diageo’s development of the Smithwick Experience in Kilkenny and the Guinness Open Gate Brewery at the brewer’s inner city Dublin base at St James’s Street.

Mr Carty has also served as a president of the Irish Tourism Industry Confederation and on the board of the State tourism agency, Fáilte Ireland.

“Over his time, nearly 21 million people have entered the doors of the Guinness Storehouse,” said Mark Sandys, Diageo’s global head of beer, Baileys and Smirnoff, who also welcomed the appointment of Ms Toolan.

1 Ross O’Carroll Kelly column 'not racist towards English people'
2 What is in the EU’s €750bn recovery plan and how will it affect Ireland?
3 Irish economy to contract by 12%, ESRI forecasts
4 Brown Thomas and Arnotts shoppers will be able to book time slots for entry
5 Beware of the rush to get back to normal business amid Covid-19
6 GSK to produce 1bn doses of coronavirus vaccine booster in 2021
7 EU needs to rebuild GDPR after only two years
8 EasyJet, American Airlines to cut 30% of staff amid coronavirus disruption
9 Pandemic Unemployment Payment: Your questions answered
10 Cairn Homes seeks permission for 611 apartments on RTÉ site
Real news has value SUBSCRIBE