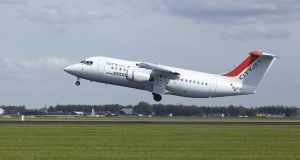 Cityjet pilots voted in favour of strike and the Unite union had set Thursday and Friday, November 24th and 25th, as the first of 13 strike days.

Pilots at Cityjet will defer a strike at the airline planned for Thursday and Friday following a hearing at the Workplace Relations Commission (WRC).

Cityjet and trade union Unite met at the WRC in an effort to end a deadlock over pilots’ pay that has seen some flight crews at its Dublin Airport base on limited industrial action since September.

The company issued a statement saying that the commission asked pilots to defer the strike while the dispute is referred to the Labour Court.

It is understood that pilots have agreed to defer the action scheduled to take place on Thursday and Friday, November 24th and 25th.

They would have been the first of 13 strike days set for between now and Christmas had they gone ahead. Pilots represented by Unite voted in favour of strike last week.

Their main dispute with the company is over pay and the union wants the issue referred to the Labour Court. It now looks likely that the court will deal with the pay claim.

Following Wednesday’s meeting, the airline said that the WRC “has recommended that the planned industrial action be deferred until a Labour Court hearing on the pilots’pay dispute has been held”.

The WRC has also asked both parties to engage in local discussions to tackle some outstanding issues.

Cityjet operates a network of regional services in Ireland, Britain and Europe, including France and the Netherlands. It has a growing business flying routes on contract services for other airlines.

Separately, it is also in talks to take over Stobart Air, which operates the Aer Lingus Regional service.

The discussions have been going on for several months. It is understood that both sides still intend that a deal should go ahead.

Cityjet recently agreed to fly four European routes from next June for Stobart from Southend Airport in London, where it intends to base some aircraft.

London-listed transport group Stobart owns Southend Airport and a controlling stake in Stobart Air. The UK company was one of the investors that bought Aer Arann after it was granted High Court protection from its creditors. It later renamed the airline.