Checking in? No thanks. I’m just here to use the wifi 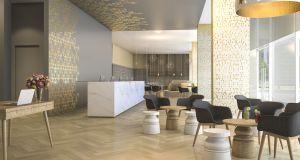 An empty hotel lobby will soon be no more. Photograph: iStock

Walk into a US hotel lobby and you may notice something unexpected: people. Not people checking in, or waiting for someone to arrive or hustling to the elevator. No, people sitting, working and socialising. In the past handful of years, hotels have started to create lobbies and common spaces that are a destination in themselves for both guests and locals. In part, the trend is in response to the rise of co-working spaces such as WeWork, the US company that has leased offices at the former Central Bank building in Dublin, which encourages collaboration in shared work spaces around the world.

“The lobby is the new public square,” said Aytan Litwin, founder and chief executive officer of White Space, a company that designs and furnishes hospitality and commercial spaces. Litwin points to Ace Hotel in New York, which opened in 2009, as the property that pushed the phenomenon into high gear.

“The trend emerged organically and accidentally,” he said. “The lobby seemed to be perpetually full with people talking, drinking and working. The Ace Hotel didn’t set out to create a co-working space – the term didn’t really exist at that point.”

Instead of discouraging wifi moochers and freelance nomads in its lobbies, the Ace Hotels took another step to actively encourage them and signal their welcome. It put outlets everywhere and catered to the creative crowd. The midtown Manhattan crowds came quickly for the trendy design, unlocked wifi, and equally unlocked toilets.

“What we wanted was for our lobbies to act as community gathering spaces and designed them with that in mind,” said Kelly Sawdon, partner and chief creative officer at Ace Hotels. “Our hotels are borne from our love for cities and people, and that means providing space for everyone, regardless of whether they’re guests or our neighbours.”

The communal tables at the Ace hotel in New York City are frequently full. The available snacks are ones expected at a trendy coffee shop or bar, not necessarily a hotel’s first floor. From noon to 4 am, the lobby bar serves everything from hipster coffee, to a crisp tofu bowl and gluten-free cannabis brownies (with 12 mg of CBD oil).

The Ace influence was quickly felt across the hotel industry, from the Link in Tel Aviv, Israel, to the Ryse Hotel in Seoul, South Korea, and the boutique chain of Graduate Hotels in college towns around the US. The trend hit a fever pitch when major hotel chains shifted their attention to creating hotel brands with a renewed focus on communal spaces.

In 2013, Marriott began the conceptual development of Moxy, a hotel brand which would have larger, more dynamic common spaces and “cosier” (yes, smaller) guest rooms. Moxy hotels do not have a front desk, and guests check in at a bar where they get their room key and a drink. Marriott decided to create the brand in response to the rise of co-working and consumer insights collected by travellers, Toni Stoecki, global brand leader and vice president for distinctive selection brand at Marriott, said.

“In many cases, solo travel would mean working in a guest room, maybe hanging in the bar,” Stoecki said. “But even if you’re alone, you want to be alone together, ideally making connections with locals that are actually hanging out in that public space.”

The Moxy brand now has more than 80 hotels in the pipeline across the US, Europe and Asia, and is planning a 158-bedroom budget hotel at Sackville Place off O’Connell Street in Dublin.

Marriott Hotel brands that are focusing on revamped common spaces are expected to more than double in size by 2022, growing at a rate that is four times as high as the growth for the rest of the Marriott International portfolio.

Sheraton hotels will also be revamping some 450 lobbies, requiring each to have something called the “productivity table.” The tables will have outlets, USB ports, and drawers that users can rent and lock. Lobbies will also have a private phone booth in the lobby, and meeting room spaces available for rent.

“It’s a new category in the hotel industry,” said Hans Meyer, co-founder of Zoku. “It’s a hybrid between a home and office with hotel services.” Almost a mix between Airbnb and WeWork, with a daily coffee and cake break in the afternoon and communal dinners once a week.

The benefit for hotels is both in the immediate and long term, Litwin said. “The more locals you attract to your lobby, the more genuine everything feels. And that is what travellers today are increasingly attracted by truly authentic experiences,” he said.

That also means Instagram experiences too, of course. A cool lobby is attractive because of who is sitting in that lobby. The home page of the Moxy hotel website features Instagram posts from guests around the world. The Ace Hotel FAQ includes a question about taking professional photographs in the hotel. Each Moxy and Ace hotel location have their own Instagram pages, too.

WeWork is trying to catch up and capitalise on the trend it has helped create as well. In 2016, it launched WeLive, fully furnished apartments rented out on a short-term basis and in 2017 started Rise by We, a high end workout facility. So what does this mean for the future of hotels? For freelancers and digital nomads, it may mean larger, trendier selection of free co-working spaces. For travellers, it may mean that instead of coming back to a quiet hotel room to finish the day’s work, you may find yourself in a vibrant lobby filled with locals and business travellers alike.

But as much as ethos and trends are discussed, a new kind of lobby will also create a new revenue stream for hotels. All those artisanal coffee drinks and organic salad bowls do add up. – New York Times