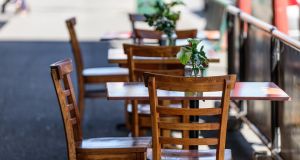 The issue of no-shows has become a hot topic in the trade in the run-up to the busy Christmas period. Photograph: iStock

Restaurants have been advised by legal experts that taking deposits at the time of booking, to be forfeited in the event of a “no-show”, may turn the booking into a stronger legal contract that implies a list of responsibilities for both sides.

Marc McDonald, a retired law lecturer at the school of hospitality and tourism management at Dublin Institute of Technology, said the legal and contractual situation around restaurant bookings is currently “unclear” due to a lack of case law.

However, taking deposits makes it far more likely that a full legal contract is in existence. This would place extra responsibilities on the restaurateur that are implied under contract law.

The issue of no-shows, which can damage a restaurant financially by leaving tables unsold, has become a hot topic in the trade in the run-up to the busy Christmas period.

The Restaurants’ Association of Ireland (RAI) is under investigation by the State’s competition watchdog for allegedly attempting to co-ordinate the policies of members on the issue, The Irish Times revealed this week. The Competition and Consumer Protection Commission (CCPC) is investigating the RAI for suggesting earlier this year that a €20 charge on no-shows would be “fair”.

CCPC has no objection to the practice of taking the deposits but it says that any attempted co-ordination by a trade body would be illegal.

“If a restaurateur seeks a deposit and takes credit card details, then that is an additional sign that a court would use to assess the legal responsibilities that flow from a booking,” said Mr McDonald.

Under contract law, for example, the restaurant would have an active responsibility to mitigate its losses by trying to sell the no-show’s table to another customer. If it was successful, Mr McDonald said, it would be legally “dubious” to keep the no-show’s deposit, as any loss under the contract would be mitigated.

If a penalty (the deposit) was payable by the customer in certain circumstances, an issue could also arise over whether the restaurant would also have to pay a penalty if it breached the contract. This might arise, for example, if it was unable to facilitate the booking at the designated time and sought to delay it if the restaurant was busy.

No-shows is also a hot topic in the industry in the United Kingdom. The industry bible there, The Caterer, previously warned that legal experts said taking a deposit conferred more rights on a consumer under contract law.