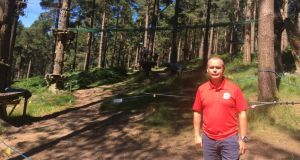 Zipit co-founder Eamonn Flynn: “Having gone through difficult times and good times, I just have a huge admiration for small business people now.”

On holidays in France, Eamonn Flynn and his business partner Chris Beattie were inspired to bring a forest zipline adventure park business to Ireland. Zipit opened its first course in 2011 and now operates three zipline parks nationally – in Roscommon, Dublin and Cork.

I think it’s just a unique adventure. Certainly at the start, people would book, come up and they weren’t really sure what they were getting, maybe a big playground in the trees type of thing. And they’d drive up, park here and they’d see the actual site and the number of people in the trees and be a little bit gobsmacked.

What is the best piece of business advice you’ve received?

There’s four of us, two husbands and wives that own the business – and somebody I know said to me one time: ‘Make sure that one of ye works on the business and not in the business.’

It’s very easy to be dragged into the operational stuff, because there’s always something needing doing. But let me tell you, I’ve found over the years that one of us at least needs to step back, look down at the business, make a plan and sell that plan to the other directors.

I would love to have done something like this 20 years earlier and my biggest mistake was not backing myself or not pushing myself to do it earlier in life.

We went from where we really had no background and nothing but a passion for doing something and won [an exclusive tender with Coillte] against at least one major UK player. We have built it up to three courses nationally with 64 employees and have plans to build it up even further.

Having gone through difficult times and good times, I just have a huge admiration for small business people now. People who took the chance and toil in their business day in, day out, jacks of all trades doing everything that’s asked of them.

Yeah, I think overall they are. We started going to the banks back in 2010, which wasn’t a great time to be looking for money. We provided about 75 per cent of the finance to get our first course off the ground and we got a 25 per cent loan from the bank. I would’ve been pretty appreciative at the time that they gave us any money considering the environment.

The one thing we struggle with the banks is their curtailing of services for small businesses. And the charges are just outrageous in some cases.

The 9 per cent VAT rate was a big help to us when we started. And I thought that was a courageous move by the Government and I think it’s been even more courageous to sustain it over several budgets up to this year. Because a lot of the companies that availed of it early on are in a much healthier state now, including ourselves. I really thought they should keep it at 9 per cent.

I suppose the biggest challenge we’re facing right now is insurance. Peter Boland of the Alliance for Insurance Reform has been talking with Government Ministers and he has appeared before a few committees in Leinster House. And I’ve been to some of the meetings and I’ve talked to some of the business owners there who are in a lot worse situations than we are – the haulage industry, the rally industry, festivals, creches, playgrounds, that type of thing.

Businesses are going under and people are telling their employees: ‘You have a job so long as the insurance premium is paid, because I don’t know what it’s going to be next time it comes around.’ I think it’s imperative that something is done about it, because there’s businesses just going to the wall.

I have no idea what it’s worth. As owners, we want to be as hands-length as possible away from the business, so if somebody came in, we’re not critical to the running of it.

But if the price was right and the conditions regarding employees were right, I would sell. I’ve a hundred other ideas in my head I’d like to try.