Airline suffering from the protracted demonstrations in Asian financial centre 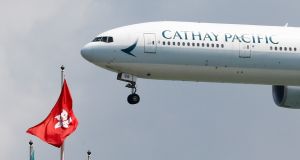 Cathay Pacific’s direct flights from Hong Kong to Dublin have been caught in the crossfire of anti-government protests as the carrier announced on Thursday it would be suspending the direct service until the end of March next year.

In the face of widespread protests and a 40 per cent year-on-year drop in the number of people coming to Hong Kong in August, Cathay Pacific Airlines said it would suspend its four-times-weekly Dublin to Hong Kong service between November 7th this year and March 29th next year.

“This is a difficult decision to make but also a necessary one in view of the commercial challenges we currently face,” an airline spokeswoman said.

The airline said it was “confident in the long-term prospect and strength of the traffic between Ireland, Hong Kong and Asia”, and that its “dedicated Ireland team based in Dublin will continue to grow our brand presence”.

The spokeswoman said the airline’s teams in Asia and Australia had begun promoting the summer 2020 season, for when the non-stop Dublin flight would recommence.

The Asian financial hub has been rocked by 14 straight weeks of protests that were sparked by objections to a now withdrawn extradition Bill but quickly snowballed into a wider pro-democracy movement. The clashes between police and protesters have become increasingly violent, and the airport’s services have been affected by strikes and demonstrations on some occasions.

In response to the sharp decline in passenger numbers, the beleaguered Hong Kong flag carrier axed a number of routes on Thursday, cut the frequency of several flights and ordered a hiring and spending freeze.

The suspension of the direct flight from Hong Kong will come as a blow to Ireland’s tourism sector as an increasing emphasis is placed on the greater China market. More than 100,000 Chinese visitors visited the island of Ireland last year and Tourism Ireland recently ramped up their marketing team in China with a view to increasing the numbers of Chinese visitors to 200,000 by 2025.

The Cathay Pacific decision comes only weeks after Chinese carrier Hainan Airlines shut its Dublin to Shenzhen service and suspended its Dublin to Beijing flight until next year, meaning there will be no direct flights between greater China and Ireland over the winter season.

Mr Gibbons said that direct, convenient and competitive access services are critical to achieving tourism growth in an island nation.

“Tourism Ireland will continue to work with all airports, and other interests, to attract new carriers and services to Ireland and will help drive demand for these services through targeted, co-operative marketing campaigns overseas,” he said.

Despite the setback, he said Tourism Ireland would continue to promote the island of Ireland “vigorously” in China and would highlight ease of access via major gateways in the Middle East and Europe.

“We will increase our marketing team on the ground in China to 12. We will ramp up our publicity, digital and social media activity and will target high-end independent travellers,” he said.

10 Vodafone goes up against rivals with new Clear Mobile offering