Budget 2021: Increasing taxes on new cars a ‘step too far’ 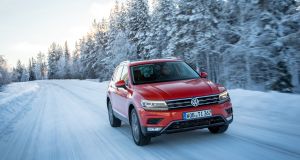 Figures from Volkswagen showed that proposed tax changes could increase the cost of a new car by as much as €10,000

Increasing taxes on new cars in Budget 2021 is a “step too far”, and new car dealers are instead urging Government to reduce taxes to encourage the purchase of new, greener electric vehicles.

In a submission to the Government ahead of next week’s budget, the Irish Car Carbon Reduction Alliance (ICCRA), which represents the majority of Ireland’s new car dealers, said moves to increase taxes on new cars to meet emission targets was a “fundamentally flawed taxation strategy”.

“Increasing taxes on new cars in the budget will be a step too far for many of our membership, and we will be forced to explore all options open to us,” said spokesman Denis Murphy.

It is understood that legal action could be one route the group could pursue.

Earlier this year the Tax Strategy Group proposed creating 20 VRT tax bands instead of 11 currently, partly driven by a new emissions testing regime across Europe. This would significantly boost the cost of a new car, with many cars falling into higher bands than at present. Figures from the Volkswagen Group, for example, showed that such an approach could increase the cost of a new car by as much as €10,000.

Mr Murphy said the Government now has an ideal opportunity to encourage consumers to switch to greener cars.

“To ignore it could have a lasting impact on Irish transport options into the future,” he said, arguing that Ireland had the second highest rate of car taxation in the EU and the second most expensive cars.

“Increasing the price of conventional cars through further tax hikes is not going to make electric vehicles more affordable. New cars have moved beyond the affordability of most people. Consequently motorists are holding on to their existing older cars for longer, increasing rather than solving our emissions problem.”

“Motorists should be encouraged to purchase newer cars – it would be a win-win for everyone,” said Mr Murphy.

The association wants “a co-operative approach” between Government, industry and policy-makers to set realistic goals, and a strategy that is “scientific, data-driven and pragmatic to ensure real and lasting reductions can be made”.

It also wants a “blended approach” to reducing emissions, which could include newer petrol and diesel cars from now through to 2030.

“This is a more pragmatic and realistic way of achieving the current targets, and an approach that is already being taken by many governments across Europe.”

5 Nanobots will live in our brains in the 2030s, says Google boss