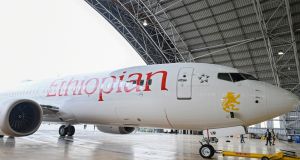 Ireland’s main aircraft lessors have had at least 224 Boeing 737 MAX 8 aircraft delivered or are on order, figures compiled by The Irish Times show.

The relatively new aircraft type has recorded two fatal crashes since its entry into service, including that of Ethiopian Airlines flight 302 and Lion Air flight 610.

Dublin-headquartered SMBC Aviation Capital appears to be the biggest owner of MAX 8s that operates out of the Republic, with five owned, three managed and about 110 committed. The company recently delivered one to Icelandair, and in December signed a deal with US budget carrier Southwest for 12 MAX 8s in a sale and leaseback agreement.

There are 13 Boeing 737 MAX 8s on the Irish aircraft register, the Irish Aviation Authority has said. It will not follow the lead of regulators in China, Ethiopia and Indonesia, all of whom ordered carriers to ground the 737 MAX model in the wake of the latest crash, which displayed similarities to the earlier Lion Air incident.

Norwegian Air has no current plans to withdraw its 737 MAX aircraft, and Ryanair has said it is reserving judgment on similar models it has ordered. The Irish airline is due to take delivery of 200 Boeing 737 MAX-8s out to 2024.

Some of the aircraft grounded by Chinese and Indonesian authorities include aircraft owned by Irish lessors including SMBC and Avolon.

In December, SMBC delivered the first MAX 8 from its order book to Chinese carrier Lucky Air, with three more to be delivered in the first and second quarter of this year.

In the summer of 2017, Avolon delivered two MAX 8 planes to Indonesian low-cost carrier Lion Air having originally delivered the world’s first MAX 8 to Malindo Air in May 2017.

Lion Air flight 610 crashed in October 2018, killing all passengers on board, but that specific plane was not owned by any Irish aircraft lessor.

In total, Avolon has agreed to firm orders for 55 MAX 8 aircraft, with options for an additional 20. Goshawk, meanwhile, owns 24 MAX 8s, while AerCap appears to hold five. However, it’s not clear whether AerCap has more on order. The lessor declined to comment.

Other entities which have operations in the Republic with MAX 8s include BBAM and GE Capital Aviation Services.

Fly Leasing has two Boeing 737 MAX 8s. The company’s chief executive, Colm Barrington, has been dealing with Ethiopian Airlines for more than 20 years.

“They’re a fantastic airline who I’ve recently used myself. We’ve had nothing but good experiences with them.”

Mr Barrington added that Fly Leasing has no more orders in for MAX 8s.

It is believed that the aircraft that crashed on Sunday was directly owned by the airline rather than leased.

US manufacturer Boeing has faced questions over the safety of the aircraft given the fact that two have been involved in fatal crashes despite its relatively recent introduction into airline fleets.

The company said in a statement that a technical team would be travelling to the crash site to provide assistance to the Ethiopian accident investigation bureau.

1 Revenue publishes list of companies tapping State for wage support
2 Cosgrave Property Group secures exit from Nama
3 How long can Government afford to keep State pension age at 66?
4 Bake-off soy sauce tweet backfires for UK trade ministry
5 Covid-19 will have a significantly worse impact on UK public finances than on ours
6 Will remote working become the norm?
7 Developers may need to go back to the drawing board as one-beds fall from favour
8 Johnny Ronan loses out on €315m Dublin docklands deal
9 Trump vs Biden: Stakes are high for the Irish economy
10 Halfords sees 700% increase in sales of e-scooters
Real news has value SUBSCRIBE