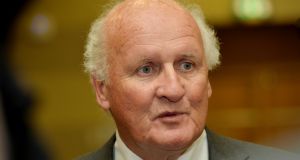 Colm Barrington: “Fly is expecting another great financial result in 2019”

Fly Leasing, the aircraft finance business led by former Aer Lingus chairman Colm Barrington, earned net profits of $85.7 million (€76.3m) last year, the latest figures show. This was up from $2.6 million a year earlier, and reflected the impact of a larger fleet and lower expenses.

The New York-listed company, with offices in the US and the Republic, said it had 113 aircraft at the end of December, 100 of which were leased, 12 of which were held for sale, and one of which was classed as an investment.

Fly said its craft, excluding those held for sale, were generating annualised revenue of $453.2 million at the end of 2018. On December 31st, its total assets were $4.2 billion, while it had cash of $281.1 million.

Mr Barrington said Fly produced a record result in 2018. “Based on these strong trends, Fly is expecting another great financial result in 2019, starting with first-quarter expected pre-tax income of more than $45 million.”

Mr Barrington chaired Aer Lingus up to the point at which it was taken over by International Consolidated Airlines’ Group in September 2015.