Cantillon: Ryanair CEO says negative coverage often fired by remarks he made in past 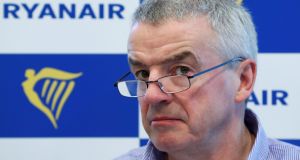 Ryanair chief executive Michael O’Leary: “I think one of the negatives of Ryanair is its association with me.” Photograph: Yves Herman

In a rare moment of introspection, Michael O’Leary admitted his combative reputation has been a negative distraction for the airline.

He attributed his tendency to go on the offensive as part of the reason he will step back from the day-to-day running of the airline this year.

In an interview with the Financial Times that cast the normally abrasive boss in a softer hue, discussing the need for greater gender-balance among pilots and promoting Ryanair’s maternity leave policy, O’Leary said: “I think one of the negatives of Ryanair is its association with me, I’m an easy person to target. Too much of the negativity that attracts itself to Ryanair attaches itself because of something stupid I said 25 years ago.”

This from the same chief executive who once said “hell would freeze over” before he recognised unions and who is as well-known for his attacks on policymakers and the public sector as for various PR stunts to promote the airline.

In his new role as head of Ryanair Holdings, O’Leary will oversee the chief executives of the main Ryanair carrier, as well as Laudamotion (based in Austria), Ryanair Sun (Poland) and Ryanair UK, the entity formed to surmount obstacles thrown up by Brexit. He will be responsible for decisions including, for example, merger and acquisition opportunities, costs and acquiring aircraft.

But he will no longer be at the forefront of Ryanair’s day-to-day affairs. He said the move was a chance to “reboot” the company’s reputation, as it introduced the improvements from a recent customer charter. “What we need to do for the next year, certainly through 2019, is shut up and deliver,” he said, “whereas in the past we might have spent too much time talking about it and not enough time delivering it.”

The question is whether O’Leary really can bite his tongue and restrain himself from public commentary in the coming months. If so, it’s likely headline writers may miss him most.