Airports reopen, and many bus, train and ferry services restart

While Galway city experienced intermittent snow showers during the day, conditions are said to be very poor in eastern parts of the county with reports of serious snow drifts. Video: Joe O'Shaughnessy 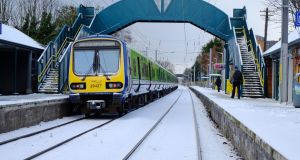 Dublin Airport, Shannon Airport and Ireland West Airport, at Knock, all reopened on Saturday morning, and Cork Airport reopened at midday. Passengers should still check with their airlines before leaving for the airport, however, as some flights are still subject to delays and cancellations.

Public transport has also restarted. Bus Éireann is operating in most cities, Waterford being an exception, but warns that it will not be operating to schedules.

Irish Rail intends to operate to timetable, but it advises passengers to check its website for details of services and delays. Its Dart service is operating across Dublin.

On the capital’s Luas tram system, the red line is operating from the Point to Red Cow but not from Red Cow to Tallaght or Saggart. The green line, which the company said was under up to 2m of snow on Saturday, is still not operational. Luas park-and-ride car parks are all closed.

Dublin Bus said it is operating on main roads but not on some local roads; overall it is running at 50 per cent capacity. It said that on Sunday it will operate core routes on their normal timetables and bring as many other routes as possible back towards full service.

Irish Rail said Dart services were operating again between Howth/Malahide and Booterstown, and from Dún Laoghaire to Bray/Greystones, but not between Booterstown and Dún Laoghaire, because of flooding.

Enterprise and northern commuter services have resumed, as have Cork commuter trains.

Dublin Connolly to Rosslare Europort will not reopen before Sunday afternoon at the earliest. Services will not resume on the Dublin to Rosslare, M3 Parkway to Clonsilla, Limerick Junction to Waterford, or Limerick to Ballybrophy via Nenagh services until Monday.

The company also warned that speed restrictions of 80km/h would apply on some routes.

All other routes are expected to return to normal on Sunday.

Although airports are open again, passengers are advised to check with their airlines, as some flights are still subject to delays and cancellations.

Dublin Airport added that its car parks were accessible and that customers wouldn’t be charged for overstaying because of the bad weather.

Aer Lingus said it expected to operate a full schedule on Sunday to and from Dublin, Belfast, Cork and Shannon, but passengers should still check their flights’ status before leaving for the airport. It said any customers booked to travel on Sunday could postpone their travel for up to seven days without charge, by rebooking online.

On the Irish Sea, some Stena Line and Irish Ferries Saturday-night and Sunday-morning crossings were delayed, but they hoped services would return to normal by Sunday afternoon.

1 Opioid executive admits to ‘no morals’ ahead of prison term
2 Who are Ireland’s 17 billionaires?
3 Are there annual limits on inheritances or gifts to a child?
4 South Dublin Credit Union members urged to borrow more to ensure survival
5 NI businesses fear burden of post-Brexit red tape on goods transport
6 From chips to €14bn in trade: Ireland and Italy’s enduring exchange
7 American YouTubers embrace the crisp sandwich
8 ‘If you don’t like challenges, you should not be in the airline business’
9 Fallon & Byrne founders McHugh and Byrne exit group
10 Cathay Pacific to resume Dublin-Hong Kong flights in March
Real news has value SUBSCRIBE