Storm Emma: How it has affected major retailers 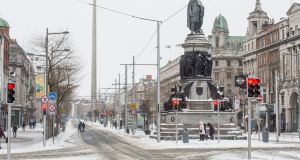 The nationwide red weather alert which is in place until 6pm on Friday has prompted a number of retailers and shopping centres to curtail their opening times.

Below are the details of the changed opening times of major outlets due to the storm.

Due to the ongoing extreme weather conditions, all Eason stores in the Republic remained closed on Friday, but its stores in Northern Ireland were open, except for its Newry outlet. The book retailer plans to open all of its outlets on Saturday.

Arnotts is planning to open on Saturday but that decision will be dependent on the weather. The department store was closed on Friday.

Kildare Village was closed on Friday, as it had planned earlier in the week. As with most outlets, it continues to monitor the weather and plans to make a decision later on Friday as to whether it will open on Saturday.

Tesco was due to open in Cork’s Mahon Point shopping centre on Thursday but reversed that decision. All outlets in the centre remain closed and it’s unclear whether they will reopen on Saturday. Patrons can contact the centre from 9.30am on Saturday morning.

Liffey Valley remained closed on Thursday and, again, has not made a decision as to whether they’ll open on Saturday. “We are closely monitoring the weather situation and will reopen when we are confident that it is safe to do so,” it said.

The shopping centre is currently closed “due to the red weather alert”. While it’s not clear if Dundrum will be open at the weekend, centre management say they’re regularly assessing the weather and transport situations.

1 ‘I’m so lucky to be in the Caribbean – a million miles from Derry Girls’
2 Tax and the Pandemic Unemployment Payment: Your questions answered
3 HSBC board rethinks overhaul and seeks even deeper cuts
4 Brexit, coronavirus and bark beetle pose challenges for Coillte
5 Joint accounts: if one of us dies, can the other access the money?
6 Ireland’s recovery is partially due to us learning our lesson
7 Ryanair to launch routes between Jordan and continental Europe
8 Elon Musk’s Starlink could take wonders of night sky away from us
9 ‘I left my home, my boyfriend and my dog and upped sticks’
10 Ireland’s top tech companies: who pays the most?
Real news has value SUBSCRIBE