Ryanair to close its base at Glasgow Airport 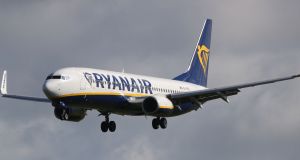 Budget airline Ryanair is to close its base at Glasgow Airport. File photograph: Niall Carson/PA Wire

Budget airline Ryanair is to close its base at Glasgow Airport.

The number of routes operated from Glasgow will be reduced from 23 to three, with five being transferred to Edinburgh.

Chief commercial officer David O’Brien said 300 jobs could be lost at Glasgow due to the move, with a potential fall in about 500,000 passengers.

He added that the decision was down to air passenger duty, but also said Brexit was a threat to Scottish tourism and the airline industry.

Ryanair will only fly to Dublin, Krakow and Wroclaw from Glasgow in its winter 2018 schedule.

It will host 45 routes from Edinburgh, including 11 new routes.

Ryanair opened a new base at Glasgow Airport in autumn 2014, one of several new bases opened across Europe that year.

Describing itself as Europe’s first and largest low-fares airline, Ryanair carries more than 130 million customers a year on more than 2,000 daily flights from 87 bases. – PA