Met Éireann has lifted its blizzard warning but the streets of Dublin are eerily quiet with very few cars, no public transport and only a small number of people making their through the city on foot. Video: Bryan O'Brien / Daniel Lloyd 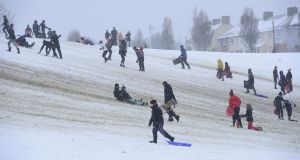 Met Éireann has downgraded its snow-ice warning to an orange alert for Leinster, Munster, Cavan and Monaghan until 6pm on Saturday.

All other weather alerts have ended

About 25,000 homes, farms and businesses are without power on Saturday morning as emergency crews battle to repair the damage wrought by Storm Emma as it passed overnight.

About 10,000 people are without water or have intermittent supply.

Although Met Éireann lifted its blizzard warning on Friday morning and removed its instruction for people to remain indoors, weather conditions remain extremely challenging in many parts of the country due to ongoing heavy snowfalls and powerful winds.

Chairman of the National Emergency Co-ordination Centre Sean Hogan said on Friday: “It’s not over. We’re still in a red warning” system.

Mr Hogan warned that some isolated houses and communities had been cut off. “Snow drifting is going to cause particular problems” and “some communities may be inaccessible for some time”, he warned.

Taoiseach Leo Varadkar said the situation was gradually moving towards a thaw but this also presented “significant challenges”.

He appealed to people not to take any unnecessary journeys and paid tribute to the emergency services for their work through Thursday night.

Many of those without power will not see their electricity restored until Saturday. ESB Networks said at one stage early on Friday morning that more than 101,000 properties were without power.

It said the severe conditions were hampering efforts to restore services. Most of the properties affected by the power cuts are in Cork, Enniscorthy, Arklow, the greater Dublin area and other eastern counties of Leinster.

An estimated 10,000 people, mainly in Co Limerick, have seen their phone services disrupted. Many local and regional roads are impassable.

A man in Co Cork was seriously injured after suffering a fall on Thursday night. A second man was also injured in the same incident.

A Lidl store on Fortunestown Lane in Citywest in Co Dublin was looted and smashed up using a digger on Friday. Two other stores have also been attacked.

In a statement on Friday, the Defence Forces said it had deployed 400 personnel and 155 vehicles to support the civil authorities in the past 48 hours. This support included helping with ambulance services and the transfer of medical staff.

Forecaster Evelyn Cusack said that while Storm Emma was no longer a storm it would still bring heavy rain and flooding along the east coast. Flooding has been reported along parts of the Dún Laoghaire seafront on Saturday.

Met Éireann said conditions remained very difficult and advised the public to continue to exercise high levels of caution for their own safety in the extreme cold, accumulated snow and icy conditions underfoot.

Ms Cusack said the snow will turn to sleet on Saturday in the south, when temperatures will rise to 4 to 5 degrees, but she said a full thaw will need a dramatic rise to at least 12 degrees and that is not forecast at present.

“I find (a thaw) hard to predict this at this stage as there is still quite a lot of snow falling,” she said.

The freezing conditions and high snowfall are a consequence of the so-called “Beast From The East” weather system colliding with Storm Emma, which is approaching from the south with its 100km/h gales.

Taoiseach Leo Varadkar on Friday repeated the warning for people not to attempt to drive on roads.

“We’re still in state of red alert. It’s okay to go outside, but no unnecessary travel. The snow will continue to fall today,” he told RTÉ’s Ryan Tubridy Show on Friday.

“It’s going to take the weekend to get things back to normal.”

Mr Varadkar thanked all those who went to work in vital services during the severe weather. “We know from previous severe weather events that most of the injuries and fatalities occur after the event and during the clean-up. We ask people to bear that in mind and not to take any chances.”

“Local authorities are out gritting to get it restored . . . but people should not be going on the roads,” he told RTÉ Radio 1’s Morning Ireland.

He also advised business owners to look at local conditions before deciding whether or not they should reopen.

The severe conditions saw a number of people in Dublin stuck in their cars over Thursday night as the vehicles became trapped in the snow. Dublin Fire Brigade assisted about 200 ambulances that were struggling to make it through the snow.

The Peter McVerry Trust said 115 rough sleepers were allocated beds in the Extreme Cold Weather Accommodation on Thursday night. It said 21 people had remained outside, six of whom went to the shelter and one of whom stayed in a Garda station. It said 14 people refused access to the shelter.

Derek Hynes of ESB Networks said the vast majority of homes and businesses without power were in a triangle from Dundalk, Co Louth, to Kildare, to south Co Dublin.

ESB Networks said it had restored power to more than 80,000 homes and businesses over Thursday night. The largest fault was in Ringsend.

North Co Dublin was particularly hit, with 9,000 without service, while 3,000 were without power in Navan, Co Meath, and 2,500 in the Drogheda area.

Conditions on much of the road network are described as extremely challenging. Supt Tom Murphy said Thursday had been a very busy night for the emergency services and that a number of people had ignored warnings to stay off the road.

“We need to allow road crews to salt and grit to get the roads clear, we don’t need stranded cars causing problems.”

All Irish Rail, Luas, Dublin Bus and Bus Éireann services were cancelled on Friday. Cork and Shannon airports were closed and all flights into or out of Dublin Airport were cancelled. About 250 people are understood to have slept in Dublin Airport on Thursday night after they were unable to get back into the city centre.

Dublin Airport has since reopened. However, Aer Lingus said all of its early morning flights to Dublin on Saturday are cancelled and most operations will not commence until after 10am.

Ryanair planned to resume services at all Irish airports on Saturday morning, but said on Friday evening it expects further disruption and has had to cancel a number of flights to/from Dublin Airport on Saturday.

Limited public transport services are due to resume on Saturday but these services are not expected to start early.

Dublin Bus said it will resume services on Saturday morning, with some disruptions. Bus Éireann said it anticipated being able to resume a level of services in some parts of the country on Saturday.

Test runs of the Luas and rail services are to take place to check the safety of electric lines.

However, the Luas Red and Green lines were not due to operate on Saturday morning. The company will make a decision on when service can resume after the red warning is lifted at 9am.

Irish Rail said that, subject to the inspections and the weather, Dart, commuter and intercity services will run except on the Dublin to Rosslare and Limerick Junction to Waterford, Nenagh branch, lines. However, it said that services will not resume until midday,

Stena Line said it hoped to recommence sailings from Dublin to Holyhead and from Rosslare to Fishguard on Saturday.

All schools and colleges are to remain closed until next week and businesses have been urged to heed the weather warnings and consider the viability of opening and the safety of staff making their way to work.

The HSE said the National Ambulance Service was prioritising emergency calls and asked people to “consider if they have an absolute emergency situation before calling for an ambulance”.

It is also advising people with hospital or healthcare appointments to contact facilities before making unnecessary journeys.