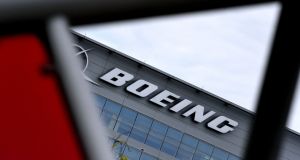 The incidents are yet another blow to Boeing, which is still reeling from the 18-month grounding of its 737 Max aircraft as well as the impact of the pandemic on demand for its planes. Photograph: Olivier Douliery/AFP via Getty Images

Dozens of Boeing 777 widebody aircraft have been grounded across the world after an engine failure on a United Airlines flight caused the plane to shed debris across a Denver suburb.

The US Federal Aviation Administration (FAA) on Sunday ordered inspections of Boeing 777 planes with Pratt & Whitney PW4000-112 turbines after an uncontained engine failure resulted in an emergency landing of a United flight on Saturday.

The regulator pinpointed issues with the hollow fan blades that were “unique to this engine”.

United flight 328 had to return to Denver airport shortly after take-off on Saturday after debris, including parts of the cowling that were designed to contain the engine, fell from the aircraft towards the ground.

United said it would ground its 24 active Boeing 777 aircraft powered by the same model of engine. A further 28 are in storage.

The ultra-high thrust turbine is Pratt & Whitney’s biggest and entered service in 1995 as the launch engine for the 777.

Analysts suggested that its long service suggested the problem was not likely to be a design flaw, although it was still too early to draw conclusions.

Nevertheless, regulators around the world are taking action to limit the use of the engine given two incidents involving the same turbine in relatively short succession.

Japan’s ministry of transport had 24 hours earlier ordered domestic airlines to ground planes with those engines until the US incident was investigated.

South Korea’s two biggest carriers, Korean Air and Asiana Airlines, have also said they would ground the jets, according to Yonhap news agency.

Europe’s aviation safety regulator Easa said it had requested further information from the FAA. But it added that there were no affected European-registered aircraft currently in operation.

The technical issue at the origin of both the United and JAL incidents was deemed “applicable only to the B777 aircraft”, Easa said.

The Irish Aviation Authority said there were no Boeing 777s on the Irish register with Pratt and Whitney engines, and none have been flying in and out of here either. Emirates uses the 777 but it’s a later model with GE engines.

In a separate incident at the weekend, a Boeing 747 cargo aircraft powered by a smaller version of the engine was forced to turn back after parts of the engine dropped off shortly after take-off from Maastricht in the Netherlands.

Easa said that while the 747’s engine was from the same family as United’s 777, it was a different variant and “nothing in the failure and root analysis show any similarity at this stage”.

No one was injured in either case.

The incidents are yet another blow to Boeing, which is still reeling from the 18-month grounding of its 737 Max aircraft as well as the impact of the pandemic on demand for its planes. It posted a record loss in 2020. Two 737 Max crashes in October 2018 and March 2019 killed 346 people.

The US lifted a grounding order on those jets late last year, while the EU cleared the planes in January.

Uncontained engine failures – where the engine’s casing fails to prevent debris from being ejected at high speeds in all directions, potentially threatening the integrity of the aircraft itself – are particularly serious, but not unheard of, said John Strickland of aviation consultancy JLS Consulting.

Cirium, the aircraft data consultancy, estimated just 60 of the 777 aircraft are in service with the PW4000-112 engines, and a further 67 in storage. The biggest customers after United are Japanese and Korean airlines.

Analysts said they expected little financial impact for Boeing from the groundings.

The aircraft maker said it was “actively monitoring recent events” and was working with regulators in the US and Japan. It recommended suspending the operations of all its 777s fitted with the same Pratt & Whitney engines as the United Flight 328 plane.

Pratt & Whitney has dispatched a team to work with investigators. It said it would be “actively co-ordinating with operators and regulators to support the revised inspection interval of the Pratt & Whitney PW4000 engines that power Boeing 777 aircraft”.

Steve Dickson, the FAA administrator, said the agency was meeting Boeing and Pratt & Whitney as a result of the incident at the weekend.

“Based on the initial information, we concluded that the inspection interval should be stepped up for the hollow fan blades that are unique to this model of engine, used solely on Boeing 777 aeroplanes,” he said.