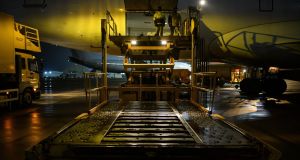 Formerly known as Transaero, maintenance specialist Atlantic emerged from High Court protection in 2015 with an investment of €2.5 million from backer Patrick Jordan.

That facility has a contract with the UK ministry of defence to maintain Airbus A400 cargo aircraft used by the RAF, some of which are currently deployed to transport Covid-19 vaccines.

Flybe went into administration – a form of protection for insolvent companies in Britain – a year ago as Covid-19 hit air travel. Atlantic bought the maintenance operation from the administrators.

Mr O’Neill explained that the Brize Norton deal added aerospace and defence to Atlantic Aviation’s current businesses, which are focused on maintaining passenger and cargo jets.

It also added Airbus as a customer, he noted. The Irish business worked mainly with Boeing aircraft before the deal. “We are looking for further opportunities as well,” Mr O’Neill said.

Brize Norton employs 112 workers, bringing Atlantic Aviation’s total headcount to more than 400. The Irish business has 320 staff and 24 trainees in its Co Clare headquarters. It began with 220 workers in 2015.

Mr O’Neill noted that skilled workers were the core of Atlantic’s operation. “We’ve put about €11 million-€12 million back into the business in terms of people, that includes better terms and conditions, learning and development,” he said.

Atlantic also announced that Eileen O’Riordan, head of human resources in the Republic with pharma giant and Covid vaccine co-developer, Pfizer, is joining its board as a non-executive director.

“We are absolutely delighted to welcome someone of Eileen’s exceptional calibre to the board of Atlantic Aviation Group, ” Mr O’Neill said in a statement.

The company said on Tuesday that despite the challenges that Covid posed to air travel, it would continue to expand customer numbers and its international reach.