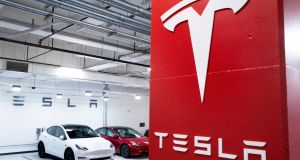 Elon Musk’s Tesla gave bitcoin its most significant corporate endorsement yet as it revealed that it had ploughed $1.5 billion (€1.24 billion) of its reserves into the cryptocurrency, adding another boost to its dizzying rise.

Bitcoin climbed more than 10 per cent to a record high of $44,100, extending its 50 per cent surge so far this year, as Tesla also announced plans to accept payments in the cryptocurrency for its electric cars, albeit “initially on a limited basis”.

The huge volatility and high costs of using bitcoin have severely limited its use for payments until now. But if Musk can overcome those limitations, it could enable Tesla to tap a wealthy market of bitcoin speculators who have become avid fans of his outspoken Twitter support for cryptocurrencies.

Given that he runs a corporation seeking to colonise Mars, an investment in cryptocurrency seems almost mundane. Who knows, maybe Martians will accept bitcoin?

The car-maker said on Monday that its board of directors and audit committee had both signed off on the investment, which represented 11 per cent of the company’s cash, net of the $5.6 billion of debt for which Tesla says it is directly liable.

Most Tesla observers, though, said the bet on bitcoin looked more like a personal bet by its anti-establishment chief executive.

“I think this is Musk’s decision, not Tesla’s,” said John Coffee, a professor at Columbia Law School. “Given that he also runs a corporation seeking to explore or colonise Mars, an investment in cryptocurrency seems almost mundane. Who knows, maybe Martians will accept bitcoin?”In a regulatory filing, Tesla said it purchased the bitcoins after changing its investment policy last month to “diversify and maximise” returns on its cash. It said the purchase was not part of the money it needed to preserve its “operating liquidity”.

The bitcoin investment amounts to a recycling of some of the billions of dollars Musk has been able to raise from stock market investors on the back of Tesla’s booming share price. Less than two years ago it flirted with bankruptcy as its reserves dipped close to $2 billion at a time when its car-making business was bleeding money.

Musk’s personal backing for cryptocurrencies and other speculative investments has had a big impact amid recent market volatility. Dogecoin has risen elevenfold since he wrote a tweet in support of it late last month. He also signalled apparent backing for Gamestop, contributing to a speculative frenzy in the retailer’s shares.

Robyn Denholm, an Australian telecoms executive who took over from Musk as chair of Tesla’s board in 2018, is head of the audit committee that signed off on the change to the company’s investment policy. The change allows Tesla to invest “a portion” of its cash in “alternative reserve assets including digital assets [and] gold bullion”.

The car-maker is the latest consumer-facing company to venture into cryptocurrency markets, following PayPal.

“We believe our bitcoin holdings are highly liquid. However, digital assets may be subject to volatile market prices, which may be unfavourable at the time when we want or need to liquidate them,” said Tesla.

“[This] is a potential game-changing move for the use of bitcoin from a transactional perspective,” said Dan Ives, an analyst at Wedbush Securities.

“Investors and other industry-watchers will be watching this closely to see if other corporations follow the lead of Tesla on this crypto path, or does it remain a contained few names that make this strategic jump around bitcoin.”