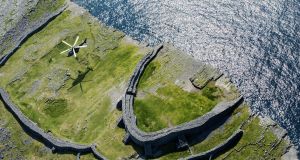 Dín Aonghasa, a prehistoric fort on Inis Mór, one of the Aran Islands. Photograph: Brenda Fitzsimons

Aran islanders are to meet Government chief whip and Gaeltacht minister Joe McHugh next week to try and resolve the latest row over the air link with Connemara.

“So two to three years after our campaign over the uncertain future of the air service, we have become the meat in the sandwich between the department and Aer Arann again,” Mr Blacam said.

Aer Arann is not commenting on the development, but it is understood that the company is unhappy with the lack of flexibility allowed in the public service obligation contract.

The contract covers about 3,500 annual flights between the three Aran islands and the Connemara airport at Indreabhán.

It is understood that the company had sought mediation to resolve issues with the department’s interpretation of the contract.

Trade union Siptu has called for a resolution, expressing concern about its members employed with the airline, which is owned by Senator Pádraig Ó Céidigh and working at Indbreabhán and the three island airports.

A spokesman for Mr McHugh said he would be assuring the islanders next week of his department’s commitment to continuing the air service from December onwards, and looked forward to constructive engagement on the matter.

He said the department would be putting arrangements in place to seek public tenders in relation to those services “as a matter of priority”.

Mr de Blacam said that even though a new ferry was running from Doolin, Co Clare this week, the island depended on the air service, especially during the winter. A socio-economic study undertaken in NUI Galway and commissioned by the islanders had made this case, he said.

This is the latest controversy to hit transport services to the Aran islands. In 2015 Mr McHugh had to abandon an initial tender which named a helicopter company as preferred bidder.

The company was offering to fly from Carnmore airport, on the east side of Galway city.

However, islanders were deeply unhappy about this proposed arrangement, pointing out that Galway airport at Carnmore was 52km from the ferry port at Ros-a-Mhíl, which provides an alternative when conditions are not suitable for flights. The airport at Indreabhán is just 8km away in south Connemara.

Aer Arann was then selected as the preferred tender under a new contract advertised in April 2016, which stated that Indreabhán must be used.