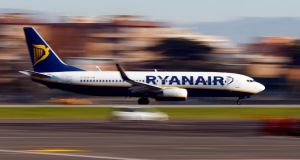 Ryanair confirmed it had signed its first cabin agreement with Anpac and Anpav, which will represent Ryanair’s directly employed cabin crew in Italy. Photograph: Tony Gentile/Reuters

Ryanair has signed its first recognition deal with a union representing cabin crew.

The Irish airline has been negotiating with groups representing pilots and cabin crew since agreeing to recognise unions last December.

Ryanair confirmed on Wednesday that it had signed its first cabin agreement with Anpac and Anpav, which will represent Ryanair’s directly employed cabin crew in Italy.

Eddie Wilson, Ryanair’s chief people officer, said the airline was pleased to announce the deal with Anpac and Anpav.

Mr Wilson added that the airline was making good progress with other cabin crew unions across Europe and hoped to sign more deals with both them and pilot groups in coming weeks.