Metro could be derailed by ‘location of airport stop’ 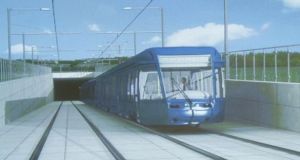 A key factor for giving the go-ahead to MetroLink is that it would carry passengers to and from the airport.

The proposed location for the Dublin Airport MetroLink train station is too far away from both terminals, undermining its potential use by travellers, the Dublin Chamber has warned.

A submission by the lobby group, which represents more than 1,300 companies, also expresses concerns about widespread disruption during construction and delays that could push completion of the project out to 2040.

Revised plans for the Dublin MetroLink service were unveiled earlier this year. The project, which will link Swords to Sandyford via a 26km cross-city route, is expected to cost at least €3 billion and is forecast to be completed by 2027. It will involve 25 stations, including 15 new ones, and is projected to carry more than 50 million passengers a year.

A key factor for giving the go-ahead to MetroLink is that it would carry passengers to and from the airport. However, in its submission to the National Transport Authority (NTA) and Transport Infrastructure Ireland (TII), Dublin Chamber said one of the largest investment projects ever proposed in the State could be undermined by the location of the airport stop.

“Dublin Chamber is concerned that the location of the Metro stop is a considerable distance from both Terminal 1 and Terminal 2,” it said.

“While the chamber accepts that the placement of the station at the mooted area may be necessary due to existing and planned development at Dublin Airport, we believe it is extremely important that both terminals are well linked to the Metro station.”

The group said that as more than 80 per cent of overseas visitors arrive through Dublin, the facility is effectively Ireland’s national airport and, therefore, must have the best possible transportation links to the city.

Dublin Chamber called for both airport terminals to be linked to the new Metro stop via an underground tunnel “that would provide for a speedy and comfortable transition between the airport and train station”.

The lobby group, which expressed disappointment that the Dart Underground project would not take place at the same time as MetroLink, also voiced concerns over possible disruption in the city during construction of the new line.

While welcoming the decision to revise the Metro plan, the chamber warned that possible extensions to the route on the southside of the city, as suggested by Green Party leader Eamon Ryan and others, would serve only to push out the completion date further.

“We’re very concerned that going back to the drawing board would see MetroLink delayed for many more years,” said the chamber’s head of public affairs, Graeme McQueen.

“We’ve already seen it kicked down the road by almost 20 years, it’s going to take the best part of 10 years to build, so further procrastinating at this point runs the risk of seeing the project’s completion being pushed out to around 2040 or more,” he added.

More than 7,000 submissions were received during the public consultation process on the Metro, which is now closed. A preferred route is expected to be chosen by the NTA and TII in the third quarter of this year, with this also being put out to public consultation.

The NTA and TII hope to put their final plan to An Bord Pleanála for approval in the third quarter of 2019.