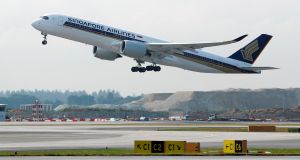 A Singapore Airlines Airbus A350-900 takings off. Photograph: Reuters

Singapore Airlines said it would launch the world’s longest commercial flight in October, a near-19 hour non-stop journey from Singapore to the New York area.

The 8,277 nautical mile (15,329km) flight from Singapore to Newark, New Jersey, with 161 business class and premium economy seats will eclipse the 7,843 nautical mile Qatar Airways flight from Doha to Auckland as the world’s longest, according to airline data provider OAG.

Airlines including Singapore Airlines, Australia’s Qantas Airways and US-based United Continental Holdings, are adding ultra long-haul flights that can capture an airfare premium of around 20 per cent versus flights involving one or more stops.

The Singapore-Newark flight marks the return of a popular route for Singapore Airlines. The carrier had flown the marathon flights until 2013, when high fuel prices made the use of four-engine Airbus SE A340-500 jets uneconomic. It has since flown to New York’s JFK Airport via Frankfurt.

Singapore Airlines is Airbus’s first and to date only customer for the A350-900ULR, an ultra-long range version of the fuel-efficient twin-engine A350 jet.

Qantas has said it is considering the purchase of the A350-900ULR or Boeing’s 777X to allow it to fly non-stop from Sydney to London from 2022, an even longer 9,200 nautical mile journey.

Singapore Airlines said on Wednesday that it also plans to introduce non-stop flights from Singapore to Los Angeles with the A350-900ULR at a later date.

The airline expects to receive its first A350-900ULR in September, with all seven on order due by the end of the year. – Reuters

Profit down 12% at Newry-based First Derivatives 07:56
PTSB sells €1.4bn of mainly interest-only buy-to-let loans 07:28
Fall in mortgage drawdowns, Brexit threat to services, and advice on your pension 06:50
Am I crazy to consider switching to an Ulster Bank mortgage? 06:00
Stocktake: Time for some seasonal stock market strength? 05:50