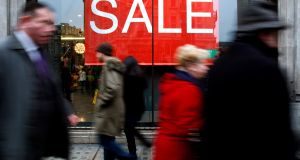 Irish retail sales were up but footfall was down in the final quarter of last year, according to data from Retail Ireland. Photograph: AP Photo/Kirsty Wigglesworth

The number of mortgage customers impacted by the tracker mortgage scandal has roughly doubled since late 2017 at three of the banks that exited the Irish market post the crash. Joe Brennan goes through the numbers from Bank of Scotland Ireland, Danske and ACC Bank.

The value of Irish retail sales rose by 2.7 per cent in the final quarter of last year but this masked a decline in footfall, according to industry group Retail Ireland. Eoin Burke-Kennedy reports.

Finch Capital, an early-stage venture capital firm with offices in Amsterdam, London and Singapore, has confirmed plans to invest up to €20 million in Irish fintech companies. Charlie Taylor has the details.

If you’re a local you might not think this but Dublin is one of 10 most “liveable cities” according to a survey of expats by ECA International. Fiona Reddan reports.

State companiesCoillte and the ESB are in talks that might spark a €1 billion investment in wind farms, which could generate enough electricity to power more than 500,000 homes. Barry O’Halloran reports.

In her weekly media and marketing column, Laura Slattery takes a raw look behind the scenes at Sky News.

1 Hurrah for the companies giving staff more time off
2 RTÉ to seek 70 voluntary redundancies as ‘large costs’ beckon in 2021
3 Covid-19 will worsen shortage of accountants, says CPA Ireland
4 Some Irish money market funds came close to danger in March
5 ‘We lost money on our planned wedding in Spain. Covid saw to that’
6 How long can Government afford to keep State pension age at 66?
7 Aryzta to pursue asset sales as takeover talks fail
8 Start-up Loanitt raises €570,000 as it looks to double headcount
9 Policy failed us during the banking crisis and it’s failing us again
10 ‘Brexit readiness’ tool launched for Irish business amid trade talks impasse
Real news has value SUBSCRIBE