Digicel dragged into $1.5bn US lawsuit over alleged corruption in Haiti 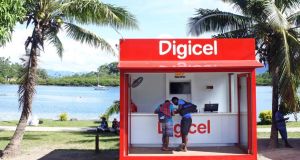 Digicel said it had ‘always conducted its business in Haiti consistent with all applicable laws and regulations’.

Digicel, the Caribbean telecoms company owned by Denis O’Brien, has become embroiled in a $1.5 billion US lawsuit over allegations it is a “co-conspirator” in a “ruse” to divert cash that is meant to fund education in Haiti, but is instead allegedly spent corruptly.

The company is among five businesses and several current and former political leaders of Haiti – one of Digicel’s most lucrative markets – who are being sued in New York by US residents from the Haitian diaspora over the alleged “scam”.

Digicel last night said it “categorically denies . . . any wrongdoing of any kind” and insisted it follows the law.

“Digicel has always conducted its business in Haiti consistent with all applicable laws and regulations,” it said.

Digicel controls more than 70 per cent of the Haitian telecoms market, and the overwhelming majority of international calls between the nation and the US are connected via its telecoms network, therefore it is the main collector of the 5 cents per minute that is passed on, purportedly to fund free education.

The levy scheme was started in 2011 by former Haitian president Michel Martelly – a one-time singer and musician known as “Sweet Micky” – who promised voters the cash would be ring-fenced to pay for “free and compulsory education”.

Since its establishment, the fund has been dogged by allegations of mismanagement and corruption, and has been strongly criticised by US-based Haitian emigrants, who say Haiti’s education system remains an underfunded mess.

Mr O’Brien, too, has in the past acknowledged concerns over the scheme. In a 2012 New York Times interview, for example, he responded to concerns that $26 million had allegedly gone missing from the fund by promising that he would ask then-president Martelly for it to be audited.

The bubbling discontent among Haitian emigrants over allegations of corruption has now culminated in the New York lawsuit taken by eight US residents of Haitian descent who either make phone calls to relatives there, or wire money.

The case was first filed on Christmas Eve, and the court papers make a series of lurid allegations against all the defendants, including Digicel.

As well as Mr O’Brien’s company, the plaintiffs are also suing Digicel’s much smaller rival Natcom, three money transfer companies including Western Union, Mr Martelly and his two successors since he left office in 2016.

The lawsuit claims that the enactment of the scheme was not lawful under Haitian law, and that its operation also breaches US law. The cash that is supposed to fund free education is instead used to fund politicians’ “personal and private needs”, it is alleged.

Digicel is specifically accused of “horizontal price fixing” and, along with the other defendants, of engaging in “a fraudulent scheme concocted and agreed to” by them all.

“The Haitian government in exchange for payments has allowed Digicel to monopolise both the local market and international calls,” it is also alleged.

All the defendants are also accused of furthering “private interest to increase the government’s purse so that they can convert and embezzle more funds”.

The plaintiffs allege “at least $500 million” of cash was wrongly used in the scheme and are seeking treble this in damages.

1 Owner of Dundrum Town Centre to sell prized assets
2 Over half of Ireland’s businesses in decline following Covid-19 lockdowns
3 Pilita Clark: Working from home is starting to pall
4 Ferrari trims full-year outlook after earnings skid on Covid
5 Can a first-time buyer get relief on a buy-to-let home?
Real news has value SUBSCRIBE