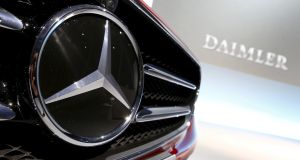 Daimler said the return on sales at Mercedes-Benz cars fell again in the fourth quarter and the company expected that to continue in 2019. Photograph: Michaela Rehle/Reuters

In the United States, General Motors reported a swing to a quarterly profit, thanks to high-margin pickup trucks and crossovers in the US market alongside cost-cutting. All of the number-one US automaker’s profit came from North America, overcoming an overall drop in the number of vehicles it sold.

But Toyota lowered its full-year net profit forecast to 1.87 trillion yen from a previous view of 2.3 trillion yen. It reiterated its annual operating profit projection of 2.4 trillion yen.

Daimler said the return on sales at Mercedes-Benz cars fell again in the fourth quarter and the company expected that to continue in 2019.

“We are below our long-term target margins. We cannot be satisfied with this. Our goal is to return to our target margin corridor of 8 per cent to 10 per cent by 2021,” Daimler chief executive Dieter Zetsche said in a statement.

For 2019 Daimler said it expected a slight growth in unit sales, revenue and earnings before interest and tax (ebit).

General Motors’ profits fell less than expected despite the Detroit automaker citing a “volatile” year in which it was hit by $1 billion in tariff-related commodity costs.