Boris Johnson gets €1,000 per minute for Dublin speech

Pendulum pays arch-Brexiteer €58,230 for being on stage for about 54 minutes 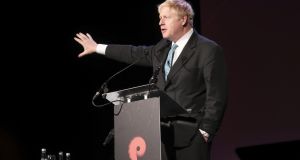 Former UK foreign minister on stage at the Pendulum event in Dublin.

British politician Boris Johnson, the Tory arch-Brexiteer and former UK foreign secretary, was paid more than €1,000 per minute for his speech last month at the Pendulum business empowerment conference in Dublin.

The hefty fee paid to Mr Johnson has been revealed in the latest update to the register of members’ interests for Westminster politicians.

He discloses that he was paid £51,250 (€58,230) by Pendulum Events & Training, the company behind the conference that was founded by former Ireland rugby star Frankie Sheahan.

The filing says the length of the engagement was approximately “two hours”, although a recording of the event shows he was onstage for only about 54 minutes in total. Mr Johnson also engaged in a brief and tightly-controlled “meet and greet” photo opportunity with VIP guests at Pendulum immediately prior to his speech.

The register says that Pendulum provided him with his transport to and from the event. Mr Johnson said during his speech that he had flown to Dublin that morning on a British Airways flight, which he joked had been delayed due to the loading into the hold of eggs and chicks.

Mr Johnson used the first part of his speech to implore the Irish Government to work with Britain to help it exit the European Union cleanly. He also derided the so-called backstop – a disputed political arrangement that is meant to guarantee no hard Border across Ireland after Brexit.

The second half of his appearance comprised an ill-tempered onstage interview with RTÉ’s Bryan Dobson, who repeatedly pressed Mr Johnson on incorrect statement he had made during the Brexit referendum campaign.

Mr Johnson conceded during his interview that he considered the original joint EU-UK declaration in December 2017 on the need for a backstop as a “convenient fiction” to be “endured” in order to progress talks. He was foreign secretary when the declaration was made.

Mr Dobson did not receive any fee for interviewing Mr Johnson.

Mr Johnson’s heavyweight fee is more than treble the amount paid recently to his fellow Tory Brexiteer, David Davis, who received £16,000 for a Dublin speech last November paid for by PwC Ireland.

1 State’s biggest landlord records 30% rise in rental income
2 Irish tourism must also help itself to survive the pandemic
3 Trump signs executive orders banning TikTok and WeChat
4 What will the office market look like after the great remote working experiment?
5 Project Eagle: What was it and why is it in the news?
6 ‘Saudi Arabia is where the opportunities will happen in future’
7 More than 1,200 tracker mortgage complaints still awaiting ombudsman ruling
8 How your country’s history affects the way you think
9 Two men face fraud charges over £1.2bn sale of Nama’s NI loans
10 Marlet secures €65m from AIB for Dublin docklands build-to-rent scheme
Real news has value SUBSCRIBE