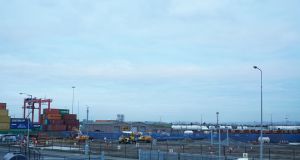 Work on the primary inspection posts where imported goods will be checked at Dublin Port after Brexit. Photograph: Enda O’Dowd

The Government should introduce deferred accounting of import VAT for three months to help businesses avoid a cash-flow crisis after Brexit, business representative groups have told the Government.

The Irish Exporters Association, Ibec, Isme, Chambers Ireland and the Irish Tax Institute wrote to the Taoiseach last week seeking a three-month deferral on paying VAT on goods imported from the UK.

They want the measure included in the Brexit omnibus Bill being considered in the event of Britain leaving the EU without a deal.

Postponing the payment of VAT on goods imported from the UK after the time of importation could save small and medium-sized companies more than €1 billion a year, the groups told Mr Varadkar in a letter.

Last week the Government announced the postponement of VAT payments on imports from the UK after it leaves the EU from the time of importation for up to two months, until they make their bimonthly VAT return.

A spokesman for the Irish Exporters Association said this would buy companies two months at most. The groups say this is not enough support for Irish companies and warned that unless there was a three-month deferral, reduced cash flow would be enough to close many manufacturing, retail and wholesale companies.

The UK will become a “third country” for trade purposes after departing the EU at the end of March, forcing companies to pay VAT on British imports at the time they are brought into the country. The Government’s measure defers accounting for the imports from all third countries for six to eight weeks.

“We believe that introducing a deferral regime of three months for VAT would significantly ease the cash flow pressures facing Irish firms,” the business groups say in their letter to the Taoiseach.

More than half of Irish importers source 75 per cent or more of their imports from the UK. As many as 90,000 businesses import goods from the UK and SMEs account for two-thirds of UK imports.

1 Berkshire Hathaway profits surge despite $10bn writedown
2 Financial ombudsman warns consumers of attempted scam
3 ‘Saudi Arabia is where the opportunities will happen in future’
4 So you want to invest in the stock market: what will it cost?
5 Facebook content moderator lodges High Court action
6 Why the Covid-19 crisis may push up house prices
7 Sacrificing pubs for schools: Ireland’s latest Covid trade-off
8 How to build your staff’s resilience while working remotely
9 What will the office market look like after the great remote working experiment?
10 DCU in AirSpeed Telecom WiMax trial
Real news has value SUBSCRIBE