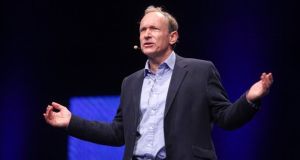 Inventor of the worldwide web Tim Berners-Lee: social media sites and search engines must be encouraged to combat the problem of fake news. Photograph: Bloomberg

The inventor of the world wide web, Sir Tim Berners-Lee, has outlined a plan to tackle fake news and has called for tighter regulation of online political advertising, which he says is being used in “unethical ways”.

“We urgently need to close the ‘internet blind spot’ in the regulation of political campaigning,” he said, in an open letter marking the 28th anniversary of his invention. The letter sets out a five-year strategy amid concerns he has about how the world wide web is being used.

Mr Berners-Lee’s said it is too easy for misinformation to spread on the web, particularly as there has been a huge consolidation in the way people find news and information online through gatekeepers like Facebook and Google, who select content to show us, based on algorithms that learn from the harvesting of personal data.

“The net result is that these sites show us content they think we’ll click on - meaning that misinformation, or fake news, which is surprising, shocking, or designed to appeal to our biases, can spread like wildfire,” he said.

So-called “fake news” can be incorrect information deliberately circulated by those who may to advance their particular political cause or viewpoint and/or those who seek to make money out of online traffic.

This allows for people with bad intentions and “armies of bots” to game the system to spread misinformation for financial or political gain.

Mr Berners-Lee said the Web Foundation, the organisation he founded in 2009 dedicated to improvement and availability of the web, is now working on these issues as part of a five-year strategy.

The 61-year-old British computer scientist also described in the letter how political advertising has become a sophisticated and targeted industry, drawing on enormous pools of personal data on Facebook and Google.

This means that campaigns create personalised ads for individuals – as many as 50,000 variations each day on Facebook during the 2016 US election, he said.

This can become unethical when voters are pointed to fake news sites and messaging to discourage people from turning out to vote, as the Trump campaign did with certain groups whose support Hillary Clinton needed to win.

“Targeted advertising allows a campaign to say completely different, possibly conflicting things to different groups. Is that democratic?” Mr Berners-Lee said. The lack of regulation in political advertising online was one of three trends that threaten the openness of the web that he had become “increasingly worried” about over the past year. The others were the loss of control over our personal data and the spread of misinformation online.

Personal data is the price many of us agree to pay for free services online, but Mr Berners-Lee points out that “we’re missing a trick” by letting large data-harvesting companies – such as Google, Facebook and Amazon – control that information.

“As our data is then held in proprietary silos, out of sight to us, we lose out on the benefits we could realise if we had direct control over this data, and chose when and with whom to share it,” he said.

A more pernicious side-effect of this data aggregation is the way governments are “increasingly watching our every move online” and passing laws such as the UK’s Investigatory Powers Act, which legalises a range of snooping and hacking tools used by security services that “trample our right to privacy”. Such surveillance creates a “chilling effect on free speech”, even in countries that don’t have repressive regimes, he said. – (agencies and the Guardian)