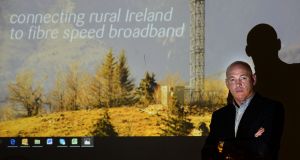 Imagine CEO Sean Bolger: he said the Government’s National Broadband Plan had opted for a fibre solution that was way beyond what was needed. Photograph: Dara Mac Dónaill

The chief executive of mobile technology group Imagine says the latest ComReg figures on the uptake of fibre broadband in Ireland represent “a complete indictment” of the Government’s broadband strategy.

Seán Bolger was speaking as new figures from the regulator showed only 7,623 homes here were actually benefiting from a pure fibre connection despite a string of announcements and hundreds of millions of investment.

He said the Government’s National Broadband Plan (NBP) had opted for a fibre solution that was way beyond what was needed and one that people were unwilling to pay for.

Fibre is widely viewed as the gold standard of internet connectivity, capable of delivering download speeds of 1,000 megabits per second (Mbps).

However, ComReg revealed this week that the true number of fibre-to-the-premise (FTTP) connections, the official industry term, was only 7,623 in 2016.

While this represented a 38 per cent jump on the previous year, it only amounted to an additional 2,000 customers signing up for the technology.

“With all the announcements of homes passed, the money that’s been invested and only 2,000 people have got the benefit,” Mr Bolger said.

Mr Bolger said the company was signing up roughly 2,500 customers a month and now had a customer base of 14,000.

“We’re connecting more in a month than Eir and Siro connected to fibre in all of last year. That’s just fundamentally the difference here,” he said.

The Department of Communications has never been prescriptive about the technology to be deployed for the NBP, but the three shortlisted companies, Eir, Siro and Enet, are extensively fibre providers.

Imagine was originally part of the tender process but failed to make the final shortlist of bidders.

Mr Bolger said Imagine customers were guaranteed a minimum download speed of 30 Mbps, which happens to be the minimum speed set down in the NBP tender.

The scheme, which will connect rural homes with limited broadband access to a high-speed network, is likely to utilise predominantly fibre technology to insure against the early obsolescence of the scheme, albeit wireless technology may be deployed in remote areas.

However, Mr Bolger said the next-generation 5G wireless technology, expected to be here within three years, is capable of also delivering download speeds of 1,000 Mbps.

Imagine is currently spending more than €1 million a month on the national rollout of its 4G long-term evolution (LTE) network.

Currently, it has 50 live sites across the State. It plans to grow this to 400 sites within three years, courtesy of a €300 million war chest stumped up by existing shareholders and new investors, plus cashflow from the business.

1 Who are Ireland’s 17 billionaires?
2 Are there annual limits on inheritances or gifts to a child?
3 Fianna Fáil may have just pressed the pause button on the property market
4 UK to prioritise EU trade deal over one with United States
5 O’Flynn ‘very unhappy’ with extra payments to former employee, court hears
Real news has value SUBSCRIBE