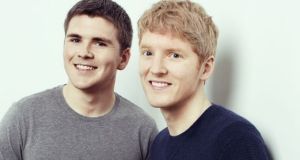 News that Stripe, the Silicon Valley company founded by Limerick-born brothers Patrick and John Collison, has acquired Touchtech Payments, has been well received. While no financial details of the deal have been disclosed, the exit is believed to be one of the largest achieved through any Irish accelerator programme

Why has Stripe bought Touchtech?

Touchtech provides advanced strong customer authentication (SCA) technology for financial institutions. You may not have heard much about SCA up to now but you will likely be hearing plenty about it in the coming months.

SCA is a new EU regulation that comes into effect in September which is forecast to radically change the way European customers buy online. The legislation, which forms part of the PSD2 “open banking” regulations, requires businesses to build an extra layer of authentication into online card payments.

What this means in effect is that consumers buying things online will soon have to confirm their identity using two authentication methods, such as a password, a phone, or their fingerprint. The impact of the regulation for businesses is big as many will have to upgrade their payments platforms ahead of the legislation coming into force.

Stripe has already designed its own SCA-ready payment application programming interface (APIs) and products to help companies manage the complexity of the new legislation but having Touchtech onboard will mean it can do even more.

Touchtech was founded in 2014 by Shekinah Adewumi, Niall Hogan and Joseph Kuye, who has since left the company.

The start-up was founded while Mr Adewumi was studying Mechatronic Engineering at Dublin City University and it has kept close linked to DCU. Indeed, up until the acquisition, the company, which previously participated on the university’s student entrepreneurship programme known as UStart, was located at DCU Alpha’s the instiution’s innovation hub. It is now moving to Stipe’s R&D hub in Dublin.

Touchtech was one of the first financial technology companies in Europe to develop a solution that uses biometric scanning to authenticate online payments. It also became the first Irish company to offer a MasterCard and Visa certified payment authentication system using fingerprinting in 2015.

Stripe is an online payments company founded in San Francisco in 2009 by the Collison brothers. It now employs more than 1,000 people globally, including over 150 in Dublin.

The company builds software and payment infrastructure that helps businesses accept money online and across borders, employs more than 1,500 people worldwide and handles billions of dollars in transactions each year.

Stripe employs about 150 people in Dublin, where it recently established an engineering hub. Last month it confirmed plans to significantly increase headcount here over the coming years after securing an e-money licence from the Central Bank.

Touchtech is the company’s fifth acquisition to date.

Stripe raised $100 million in a follow-on funding round earlier this year in a move that valued the company at $22.5 billion. At ages 30 and 28 respectively, Patrick and John Collison are among the world’s youngest billionaires.

While Stripe started off securing relatively small clients it now counts the likes of Amazon, Uber, Booking. com, Deliveroo, Shopify and Google among its customers.

Although the company has recorded phenomenal growth since it was established, the company’s founders insist it has barely begun to take advantage of the opportunities open to it given that only about 3 per cent of global commerce currently happens online.

1 Abtran challenges award of €63m contract by Irish Water to rival company
2 Pilita Clark: When a rude boss keeps you waiting, why not walk out?
3 Are there annual limits on inheritances or gifts to a child?
4 Money matters: ‘My father embarrassed us with his haggling’
5 US threatens retaliation against EU over proposed carbon tax
Real news has value SUBSCRIBE