What’s the best new smartphone on the market right now? 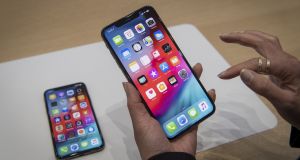 The iPhone Xs Max weighs in with a 6.5-inch display, and it has become the one to beat. Photograph: David Paul Morris/Bloomberg

Which smartphone should you buy? We’ve taken four of the best mobile devices currently available in Ireland and put them through their paces. The contenders: the iPhone Xs Max, Samsung S10+, Huawei P30 Pro and the Google Pixel 3 XL, all flagship smartphones that promise a lot. The verdict? Read on.

This is always a hotly debated category, and that is mainly because it is such a personal thing. While some people like curves and bright colours, others prefer cool looks and classic lines.

The iPhone Xs Max doesn’t deviate much from the styling introduced with the iPhone X, and even that has a hint of classic iPhone about it. The metal bands around the edges are definitely a callback to the 2007 model, and overall it’s a sleek package. That glass back looks great but, in terms of practicality, it’s extremely expensive to fix.

The Google Pixel 3 XL takes a different tack. It opts for the glass back too, yes, but it has a two-tone look. There’s a choice of three colours too: black, white and a blush pink. The fingerprint reader is on the back. And while the 3 XL is supersized, it doesn’t feel too big while you are using it.

The current favourite? The Samsung Galaxy S10+. It’s big without being unwieldy, and although the curved-edge screen hasn’t changed dramatically from the S6 Edge, it has been slimmed down and had some weight shaved off, and the bezels have been trimmed down to almost nothing. The fingerprint reader is now under the screen, eliminating the trickier rear reader of the S8 and 9 models. I’m also a fan of the cut-out camera – the Infinity O display, according to Samsung. And, to top it off, it’s really light.

The Huawei P30 bears some similarity to the S10+, but it’s slightly chunkier and heavier. It does come in some nice colours, though, with fancy names such as Amber Sunrise, Breathing Crystal and Aurora.

If there is one constant complaint about smartphones, it’s the battery life. New phones make big promises, but they can’t account for one factor: people. We stab at our smartphones mindlessly when we’re bored. We scroll endlessly just for something to do. We have apps for everything we thought possible and some things we’ve never even considered. And we have increasingly larger screens. All that adds up to one thing: battery drain.

In saying that, though, there has been some progress. As a particularly heavy phone user, I consider a phone that lasts me a day to be a good performer.

On paper, the biggest battery can be found in the P30 Pro, which has a 4,200 mAh battery. That just edges out the Samsung Galaxy S10+ at 4,100 mAh. Apple doesn’t disclose battery specs on its site, but some filing revealed the Xs max has a 3,174 mAh battery, which is the largest of any iPhone to date. The Pixel 3 XL beats this at 3,430 mAh.

But it’s not all about the specs on paper. The iPhone Xs Max comfortably lasts most of the day before hitting its reserve power. The P30 Pro gets into day two, as does the S10+ and the Pixel 3 XL.

Software makes a difference. Low-power mode on the iPhone is good, but the ultra battery-saving technology on the Samsung, Huawei and Google Pixel can eke things out even more, even when things are dire. All four perform well but the three Android phones are a toss-up when it comes to which has the better battery offering.

The good news? All four phones now include wireless charging.

This is probably the most important of the bunch. When was the last time you saw someone carrying a point-and-shoot compact camera? Family events these days are a sea of smartphones, each vying for prime position as they snap a few hundred photos. Compact cameras, while not out, are definitely down.

The flagship smartphones have been building up their camera expertise over the past few years and, as a result, all of them deliver excellent photographs in good lighting conditions.

Each of them has its strengths. The iPhone Xs Max takes some great landscape shots and has a phenomenal portrait mode that rivals some of the best cameras out there. It knows when to step in and when to leave things well enough alone, so there is none of that “beauty” smoothing when taking selfies, and the AI isn’t intrusive. That dual camera on the back of the phone mixes well with smart HDR, which mixes several photos to produce the best possible image you can get.

The Pixel 3 XL is another good all-rounder. It stepped things up a notch when it introduced the Night Sight feature, which takes some incredibly good low-light pictures, putting it up to Huawei. The 3 XL has easily accessible preset modes – including panorama and portrait mode on the main camera screen, along with the video option – and extras such as slow-motion video, a 360 photosphere feature and an AR mode that brings film characters and even puppies into your pictures. Switch to photobooth mode and the camera will fire as soon as it detects a smile.

Samsung’s S10+ camera has added a wide-angle lens to the regular and telephoto options, bringing a new viewpoint to your images. It puts that triple camera to good use. The pictures are crisp and clean, and don’t lose detail. Where it does fall short a little is in night mode – but that’s a matter of a software update, as Pixel 3 XL demonstrated.

But there is a clear winner. Huawei’s Leica-sporting P30 Pro covers all eventualities, from long-range shots and landscapes to portraits and low light. The P30 has it all: detailed shots, excellent colour and a night mode that would put most regular cameras to shame.

While some opt for a dual camera and others went for a triple camera, Huawei stepped things up with a quad Leica camera. The important things to note? It does incredible zoom photographs, and you can pick out details instead of having the whole thing descend into a soft, blurry mess.

It’s in the low-light shots that the P30 Pro shines. It’s very hard to beat Huawei’s new flagship, though there would be interest in seeing rivals try.

The days of small phones are long gone. These days, the flagship smartphone have displays of more than 6 inches, something that would have been unthinkable just a few short years ago.

Size isn’t everything, though. The quality of the display is more important: how it performs in bright sunlight, will the colour reproduction stand up to scrutiny, and how will it cope with a hurling match?

The good news is that all four phones have excellent screens, and there is very little to choose between them.

The iPhone Xs Max weighs in with a 6.5-inch display, and it has become the one to beat. It reacts well to changing light, can be viewed in bright sunlight and is beautifully detailed. Text is crisp; graphics flow well.

It has tough competition, though. The Pixel 3 XL has a QHD+ OLED display that measures 6.3 inches – a fraction smaller than the iPhone Xs Max. There’s a notch, too, to accommodate the front-facing camera.

But overall, the colour reproduction and the brightness of the screen is top notch.

Huawei’s P30 Pro has a surprise trick: it uses the screen as an earpiece, so you don’t lose screen space to a grille. You also get a little extra screen compared to the Pixel 3 XL, at 6.47 inches. It’s barely noticeable, but it may be a deal-breaker for some. The phone supports mobile HDR, but not HDR10+, putting it just behind Samsung. But, in general, the P30 Pro’s OLED panel puts in a great performance, despite not reaching the Quad HD of its rivals.

Samsung makes smartphone displays for its rivals (*cough* Apple), so that should be proof enough of its expertise. The S10+ also opted for the 6.4-inch display, but it has amazing colour depth, and the brightness is spot-on. Yes, the camera cut-out can get in the way but, like the notch, it fades into the background quickly enough. What it also has is the ultrasonic fingerprint reader under the screen. That’s a nice trick – and one that is useful. That edges it ahead of the pack here.

When it comes to software, there are a few things to consider. How much non-negotiable software is loaded on to the phone? How easy is it to use? And does it actually look good? It’s hard to beat iOS in terms of polish. The software works well and any gaps can easily be filled with a browse through the App Store. But there are some apps you can’t remove – Safari is a constant, for example – and even if you do remove them, it won’t free up any extra space. Apple says it has designed the apps to be very efficient in terms of storage, so any impact will be minimal.

Samsung has its own apps neatly tucked away in a folder, although it includes a second web browser in case you don’t want to use Chrome’s mobile offering. Huawei does something similar, but there are lots of irritating requests for access to data on items such as HiVision and HiCare. I don’t bother with them, but extricating yourself from the web of them is annoying at best.

Google, on the other hand, offers a fairly clean interface. It’s easy to find your way around too. The Pixel 3XL shipped with the newest version of Android, and has access to useful features such as the Digital Wellbeing beta. That puts it just ahead of the pack here.

Your choice will ultimately depend on what you want from your smartphone. They are all worth considering and, being high-end models, there is little to separate them. This is where small differences, such as the P30 Pro’s spectacular night mode or the iPhone’s well run App Store, push one phone above the rest. That, however, is down to personal preferences.