Amazon employees listen to what people say to Alexa – report 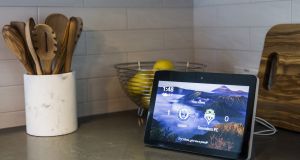 As any user of a smart speaker knows, occasionally ambient noise is mistaken for the wake word, triggering the recording by accident. Photograph: Bloomberg

When Amazon customers speak to Alexa, the company’s AI-powered voice assistant, they may be heard by more people than they expect, according to a new report.

Amazon employees around the world regularly listen to recordings from the company’s smart speakers as part of the development process for new services, Bloomberg News reports.

Some transcribe artist names, linking them to specific musicians in the company’s database; others simply listen to the entire recorded command, comparing it with what the automated systems heard and the response they offered, in order to check the quality of the company’s software.

Technically, users have given permission for the human verification: the company makes clear that it uses data “to train our speech recognition and natural language understanding systems”, and gives users the chance to opt out. But the company doesn’t explicitly say that that training will involve workers in America, India, Costa Rica, and more nations around the world listening to those recordings.

In a statement given to Bloomberg, Amazon said: “We take the security and privacy of our customers’ personal information seriously. We only annotate an extremely small sample of Alexa voice recordings in order [to] improve the customer experience. For example, this information helps us train our speech recognition and natural language understanding systems, so Alexa can better understand your requests, and ensure the service works well for everyone.

“We have strict technical and operational safeguards, and have a zero tolerance policy for the abuse of our system. Employees do not have direct access to information that can identify the person or account as part of this workflow. All information is treated with high confidentiality and we use multi-factor authentication to restrict access, service encryption and audits of our control environment to protect it.”

Amazon has long insisted that Alexa can only send recordings back to Amazon’s servers if the device hears its “wake word”, such as “Alexa” or “Echo” (or is manually activated by pressing a physical button), and there is no suggestion in Bloomberg’s report that this is not the case. However, as any user of a smart speaker knows, occasionally ambient noise is mistaken for the wake word, triggering the recording by accident. As a result, workers occasionally hear things they shouldn’t. Sometimes, that means private information such as bank details or full names, which employees are supposed to flag as “critical data”.

Other times, there’s no clear procedure: two employees told Bloomberg that they heard “what they believe was a sexual assault”. Amazon reportedly told them it wasn’t the company’s job to interfere.

Alexa isn’t the only “AI” service that actually relies on heavy use of human labour. The fusion of the organic and digital is common across the sector, either to train services in how to provide new features, or to secretly fill in gaps in their capabilities without disclosing that fact to users. For instance, in 2017, business expense management app Expensify admitted that it had been using humans to transcribe at least some of the receipts it claimed to process using its “smartscan technology”, while Facebook was more open about the fact that a short-lived personal assistant, M, was an explicit blend of human and automatic responses.

It is not even the first time Amazon has been found to be relying on human labour for its smart services. Earlier this year, the Intercept reported that the company’s Ring-branded smart doorbells provided their R&D team with “virtually unfettered access to every video created by every Ring camera around the world”. – Guardian service

Covid-19 puts end to hugs and kisses on RTÉ’s First Dates 17:25
Central Bank has sold off 70% of IBRC-linked bonds 16:56
Close to 300 Greencore staff test positive for Covid in Northampton 16:32
Brown Thomas and Arnotts to cut 15% of jobs due to coronavirus crisis 16:00
How Argentina and its creditors thrashed out a $65bn deal 13:01

1 Brown Thomas and Arnotts to cut 15% of jobs due to coronavirus crisis
2 Close to 300 Greencore staff test positive for Covid in Northampton
3 47,000 homes need to be built each year to solve housing crisis, report says
4 Jervis shopping centre takes major tenants to court over rent disputes
5 It was business, it was personal: the Redstones’ father-daughter feud
Real news has value SUBSCRIBE