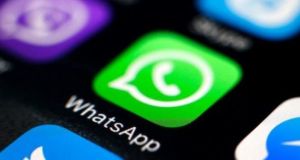 There are currently more than 2 billion WhatsApp users globally and 100 billion messages are sent each day via the platform.

The Irish arm of messaging platform WhatsApp recorded an €11.2 million loss last year after setting aside €77.5 million to cover possible fees linked to an investigation undertaken by the Irish Data Protection Commissioner.

The Facebook-owned company established an Irish subsidiary in 2017. Its key role is acting as the data controller for European users of the WhatsApp service, and for the provision of services to other group entities.

Newly filed accounts show admin expenses for WhatsApp Ireland increased by €86.2 million, versus the previous 18 months, primarily due to the recognition of provisions of €77.5 million for “possible administrative fines arising from regulatory compliance matters presently under investigation.”

“The provisions recognised are based on the advice of outside legal counsel, regulatory correspondence received in 2019 and 2020, and relevant mitigating and other factors, which under the relevant legislation may impact any final fine amounts,” the company said.

The unit, which employs just 20 people, added that it did not know how much the fines that might ultimately be levied on it could amount to.

The Data Protection Commission investigation into WhatsApp examined its compliance with Articles 12 to 14 of the General Data Protection Regulation (GDPR) in relation to transparency around what information is shared with Facebook.

The commission earlier this year submitted its preliminary decision to WhatsApp Ireland. However, it is unknown when a final decision will be announced.

The Data Protection Commissioner has been heavily criticised for delays in reaching enforcement decisions on tech companies. The Commission is the lead EU regulator for companies including Google, Facebook, Microsoft and Twitter under the “one-stop-shop” mechanism, introduced with GDPR in May 2018.

While it has announced a large number of investigations into tech giants for possible data and compliance breaches, it has yet to issue a single fine. It is believed to be close to be close to announcing a decision in relation to an investigation into Twitter, however.

GDPR gives data regulators powers to fine companies up to 4 per cent of their global turnover of the previous year or €20 million, whichever is greater, for violating the law.

There are currently more than two billion WhatsApp users globally, double the number using the app in 2016. It now delivers about 100 billion messages a day.

Facebook acquired the company in a $19 billion deal in 2014 when it had just 14 employees and 420 million monthly users.

2 Irish banker was tapped to head Deutsche Bank board

3 Apple’s cash mountain, how it avoids tax, and the Irish link