Dubliner is well used to convincing Liam Neeson, U2 and other celebrities to part with their money 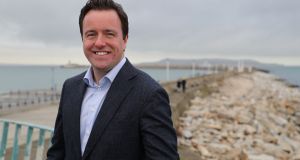 Alan Foy might be spending his lockdown days convincing celebrities such as Hollywood actor Liam Neeson and members of U2 to invest in his new €100 million “technology for good” fund, but if he’s starstruck, he’s not showing it.

The way he describes it, getting well-known Irish people to part with their money isn’t as difficult as it might seem. This is especially true when they’re being asked to put on their green jersey and back promising local start-ups that should not only deliver a healthy financial return but are also intent on doing some good in the world.

He laughs, however, at the suggestion he might sweet-talk stars into backing the Impact Ireland Fund by playing them off each other.

“It’s very hands-off. I’m not spending hours trying to get The Edge to put in more money,” he says.

It’s unlikely Foy would be in awe of the Irish rock star either way, given not only his own success but also the nature of his first venture – a company that arranged airport pick-ups and accommodation for entertainers. He was just 18 when he started that business, running it while studying at Trinity College Dublin.

“A friend told me about a company in England that was doing it. I flew over and met them and asked if I could run the Irish operation, and they went for it,” he says.

It was an early sign of Foy’s entrepreneurial nous and one he’s now turning to good use with the new fund.

The Dubliner, who recently stood down as chief executive of technology company Blueface after its sale to Comcast, is now leading private equity firm VentureWave Capital, along with another recently departed Blueface executive, Brian Martin, and Kieran McLoughlin, the former chief executive of the Ireland Funds.

VentureWave Capital is already halfway towards its €100 million target for the fund, which this week announced its first investment, putting €2 million into meal delivery kit start-up DropChef.

It also has an advisory council chaired by former taoiseach Enda Kenny and including many other heavyweights.

The new fund is aiming to take strategic stakes in up to 15 companies that are either originally from Ireland or which are prepared to relocate from elsewhere and grow their business here. It will invest between €1 million and €25 million, targeting cloud-based tech-for-good companies with revenues of less than €10 million that are working in sectors including education, healthcare, food and agriculture, energy and the environment.

Foy says the fund is “seeking investments that will generate a return for society as well as investors”.

“The response to the fund so far has been outstanding. In some ways our proposition is an easy sell because people are really interested in the idea of marrying profit and social impact,” he says.

“It is part of a wider vision of Ireland becoming the Silicon Valley of Europe. It’s within our grasp if we provide backing for promising early-stage companies,” Foy adds.

This, according to the entrepreneur, means more than just ponying up cash, but also providing other supports and showing start-up leaders how to learn from their mistakes.

“We’re much more hands-on in terms of active management than you might typically see. We want to help start-ups figure out the levers of growth and how to internationalise by bringing in expertise to support them,” he says.

DropChef is, he says, a good example of exactly the kind of company the fund wants to back, with its emphasis on educating the public and a focus on reduced waste.

“We’ve got Bobby Kerr to join the board as he will bring so much value to the company given all he knows about the food sector.”

Foy is friendly and forthcoming by nature, but he’s also the type of person who is methodical and determined to see things through no matter what. Not only did he achieve first-class honours in his business studies course at Trinity while running the airport transfer business, but he was also awarded a gold medal for academic distinction.

The entrepreneur says he has spent his whole life gearing up for this moment.

“I’ve always had the entrepreneurial bug but above anything else I also always wanted to be in venture capital,” he says.

Foy started his career proper working at Dublin insurance broker Coyle Hamilton and then at America Online before joining NCB Stockbrokers to work in wealth management in 2004. He stayed there for a number of years and enjoyed it, but a chance encounter with renowned venture capitalist and tech billionaire Tim Draper at a conference held in the Westin set him on the path to becoming first a successful businessman and now a VC guy.

“I told him I wanted to be a venture capitalist and he said, ‘Well, have you ever run a company?’ I said no, and Draper said, ‘You won’t really be a good VC then.’ So I decided there and then that I needed to do exactly that to prove my credentials.

“He turned out to be right as well because if you haven’t charted the course of an entrepreneur, and seen the highs and the lows, and survived the journey, then how can you identify with those you’re backing?”

Around this time, Foy did some consultancy work on voice-over-internet technology, which was taking off at that point, and came across Fergal Brady, co-founder of Blueface, a Dublin company targeting residential customers.

Foy convinced Brady that Blueface should be focusing on businesses rather than consumers and that he was the man to lead the company. He led a management buy-in in 2011 through a vehicle called Venturewave with an old college friend, Brendan Gaffney. This was supported by Edward Guinness, the Earl of Iveagh.

“It wasn’t all plain sailing transitioning to B2B, particularly as it was being done during the recession and I was betting my career on it working out. Some of the big telcos were also a little wary of us and there was a general feeling that small companies such as ours couldn’t compete in the marketplace,” he says.

The company agreed a $500 million merger with US rival Star2Star in January 2018, and Foy continued to lead it until its sale to Comcast, the corporate behemoth that owns media networks Sky and NBC, earlier this year. He has stepped down as chief executive but remains chairman of the company.

Still only 38 and now a resident of Dún Laoghaire, the Dubliner grew up on Griffith Avenue and attended Mount Temple School in Clontarf.

Making money may be a motivation for Foy but it’s not the only one. He currently serves on the boards of Mount Temple and Endeavour Ireland, as a member of the Provost’s Council at TCD, and as chairman of the board of The Ireland Funds.

“A lot of my philosophy tracks back to my schooldays. Social conscience was part of our day-to-day learning at Mount Temple and as I got older I was involved in Rotary Club, where the model is service above self, and of course there’s the Ireland Funds and so on. It’s very important to me,” he says.

“I also think my parents played a key role. I was an only child and both my parents were very encouraging in educating me to do the best I can and be happy.”

Married with three young children (including twins), Foy doesn’t typically have much free time outside of work and his other obligations. Not being on a plane every week is a change and has allowed him to focus more on his fitness and to read the occasional book. But outside of this it is very much work and it seems he wouldn’t like it any other way.

When it comes to VentureWave’s fund, Foy is optimistic about it reaching its target. He says that 90 per cent of the funds raised so far have come from outside of Ireland.

“It’s great to see the support internationally and I expect that to continue. I’m hopeful that what we start with the fund will make a significant contribution long into the future,” he says.

He says that rather than him having to contact would-be investors, they’re contacting him.

“Impact investment is growing in size and importance, particularly for entrepreneurs who have done well and who are thinking about what their legacy might be and what they are going to do with their investment dollars in the years to come. That is definitely part of the draw of our fund,” says Foy.

“The idea that we become investors in technology success stories from Ireland is core to our mission and we have really ambitious plans,” he adds.