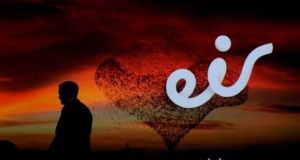 Revenue at phone and broadband provider Eir decreased by 3 per cent, or €9 million, to €296 million in the last quarter compared with the same period last year, its latest set of results show.

The group said revenue growth in broadband, managed and data services revenues and bundling was offset by a reduction in traditional access, voice and prepay revenues.

Group adjusted earnings before interest, taxes, depreciation, and amortisation of €154 million increased by 2 per cent or €3 million year-on-year. Group operating costs of €142 million were down by 7 per cent or €10 million.

Operating profit was €222 million, which was up from €39 million. This was largely due to the sale of the entire share capital of Emerald Tower, its mobile telecom infrastructure management company, to Phoenix Tower Ireland for €186 million in July.

The results, which cover the quarter ended September 30th, show reported fixed line revenue, before intra-company eliminations, of €221 million, which was down by 4 per cent or €9 million.

At September 30th, 81 per cent of the broadband base, or 784,000 customers, were availing of fibre based high speed broadband services, which was an increase of 9 per cent or 67,000 customers.

Reported mobile revenue of €81 million decreased by €1 million or 2 per cent. Revenue growth in postpay was offset by a decrease in prepay, largely driven by migrations to postpay, as well as by a decline in roaming revenue due to the impact of Covid-19 restrictions.

Eir’s headcount stood at 3,260 at the end of September, which was a decrease of 6 per cent or 215 people. The group had strong liquidity with cash on hand of €528 million after asset disposal proceeds.

Access revenue of €112 million, which covers rental and connections, remained stable. Declines in retail and wholesale access line revenues of 3 per cent and 6 per cent respectively was offset by a 9 per cent increase in broadband revenue for the period.

Total mobile revenue of €81 million decreased by 2 per cent in the quarter. Prepay handset revenue declined by 13 per cent when compared to the corresponding prior year period, mainly due to a decline in prepay customers of 59,000 or 13 per cent.

The company had a total of 1,184,000 mobile subscribers at the end of September, which was an increase of 16 per cent.